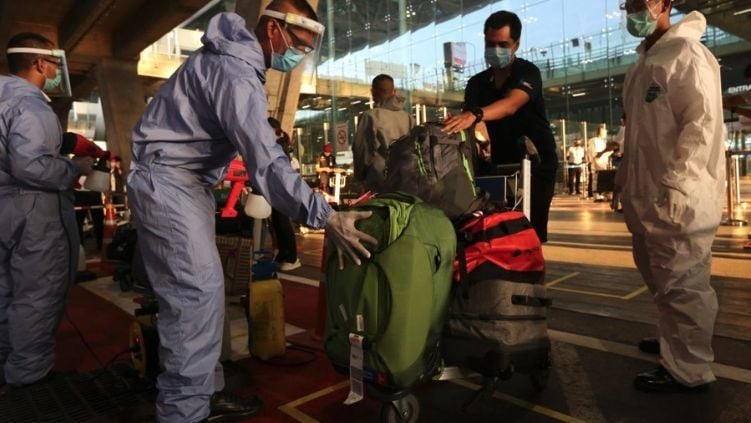 If you were a traveller, trying to get accurate information about how and when you could return to Thailand, you’d be rightfully confused. So are we. Now it emerges that the arrival of the first Special Tourist Visa travellers, headed for Phuket, has been postponed at least until the end of the month. Scheduled charter flights for Scandinavian and Chinese travellers have been pushed forward to at least the end of October. Then again, the Thai Health Minister has said that the first plane is, indeed, arriving today.

The Thai government first proposed, then confirmed, details about a new, highly regulated Special Tourist Visa, the STV. Then it was announced that the first ‘batch’ of STV tourists would arrive from Scandinavian countries and China in October and November, in Phuket. Then the Phuket Governor announced that he hadn’t been formally told about the arrangements and that he’d “read it in the local media”. That was followed up by an announcement that the first arrivals would be delayed until after the end of the Phuket Vegetarian Festival, October 25.

Just as the first passengers were scheduled to arrive, the arrival dates have been shuffled forward again as, according to local Phuket tourism officials, “preparation for receiving foreign travellers are not complete”.

But just to add further confusion, the Public Health Minister, Anutin Charnvirakul, contradicted that information yesterday afternoon and said that a plane of Chinese tourists were still due to arrive by a special charter flight to Phuket today. Phuket airport officials have also said they’re 100% ready with hundreds of trained personnel “to ensure that the plane of an estimated 150 Chinese Nationals from Guangzhou are safely processed”.

The number of tourists, the preparations, confirmed flights, precise arrangements – all up in the air. The Phuket Governor, Thai Public Health Minister, TAT Governor and Phuket Airport officials are all saying different things.

The first group of 300 (or only 150?) Chinese tourists and businessmen from Guangzhou, scheduled to arrive on the southern island today, will not permitted to travel. It’s been reported in Khaosod English that the Thai government won’t offer them refunds for accommodation, insurance, flights, along with any other costs they had incurred so far to obtain their STVs

Yuthasak Supasorn, the TAT governor, says the arrangements for their travel should be treated as a postponement, not a cancellation.

“…there’s no need for those refunds, because their trip is not cancelled, it’s just delayed.”

Little has been published about the impending, now delayed, travellers… where they are travelling, where they are staying, the costs and arrangements of their flights, beyond the knowledge that they were flying to Phuket on a chartered Air Asia flight. But Yuthasak expressed his confidence that the STV “will be implemented later this month” when all the necessary measures and procedures are put in place.

Another batch of Scandinavian travellers was set to arrive on October 21 but that date has now been thrown into doubt by the Phuket Governor’s announcement on Tuesday that the island should wait until after the Vegetarian Festival (which finishes on October 25).

But, again, Yuthasak assured reporters yesterday that would arrive before the end of October “for sure”.

The Special Tourist Visa is the first official attempt at allowing some sort of tourism back into Thailand but comes with a hefty price tag and lots of conditions and regulations. There are also a limited amount of countries from where the travellers are considered “low risk”.

People, who have contacted the US embassy and consulates, for example, are being told that US citizens are not currently being considered for travel under the STV.

Arrivees would need a health certificate, pre-paid arrangements for a mandatory 14 day quarantine, special insurance and can only travel on Thai government-approved charter or private flights. The actual visa only costs 2,000 baht, is valid for 90 days and can renewed, at a cost each time of another 2,000 baht, twice, giving a total of nearly 9 months if required.