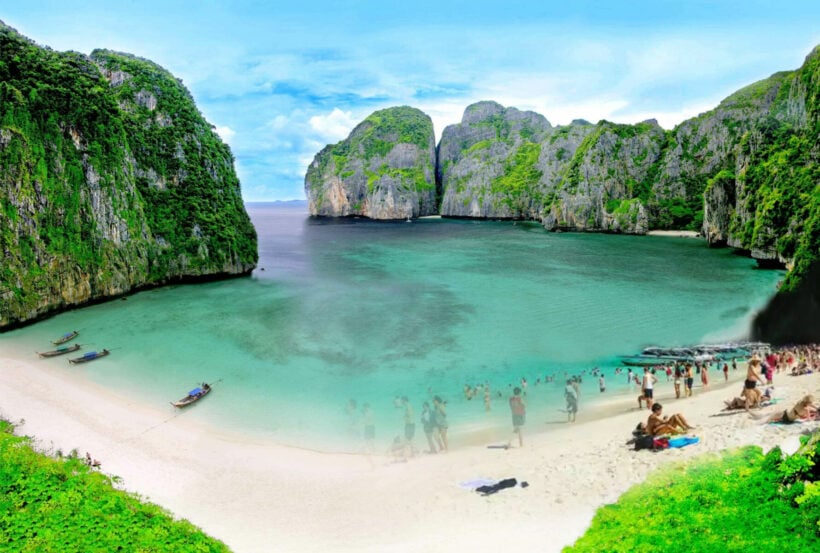 PHOTO: TAT is predicting the empty beaches of Thailand will soon be full of tourists again. (via The Guardian)

In their ever-optimistic estimations, the Tourism Authority of Thailand has announced that they are aiming for 3 million foreign tourists visiting this year. The number seems ambitious as it’s only a 25% reduction from the TAT’s earlier projection in April of 4 million visitors, just before the onset of the massive and pervasive third wave of Covid-19 that brought Thailand to its knees and dashed most hopes of an easy and large international reopening anytime soon.

But as tourist meccas like Phuket are inching closer to their sandbox reopening date of July 1, international flights are being scheduled again, and mass vaccination campaigns launched nationwide, the country is once again upping their figures of expected international arrivals. At one point, numbers were revised to expect just 500,000 international tourists in 2021, in contrast to the 40 million travellers in 2019 before the Covid-19 pandemic.

The TAT is focusing on the plan to let fully vaccinated tourists enter sandbox areas, starting with Phuket on July 1, without quarantine, though critics say the 14 day period where travel off the island is not allowed is essentially a soft quarantine. In October, Thailand plans to follow a similar scheme for 9 other provinces popular among tourists.

It will take time to ramp up arrivals back to Thailand, the TAT admits. Projections expect to see 129,000 visitors arriving to Thailand in the third quarter of 2021, about 4.5 times the amount of people who arrived in the first 4 months of the year. They then predict that if the sandbox relaunch is successful, nearly 2.9 million travellers will pour into tourist destinations in Thailand in the last 3 months of the year.

The deputy governor of the TAT said they believe the 3 million international tourists figure is reasonable for the fourth quarter since Thailand usually saw at least that many visitors per month before Covid-19. He believes the tourist-dependent struggling country will generate revenue of 240 to 300 billion baht, which works out to a generous 100,000 baht spent per traveller.

Investigation launched into death of woman who received AstraZeneca vaccine