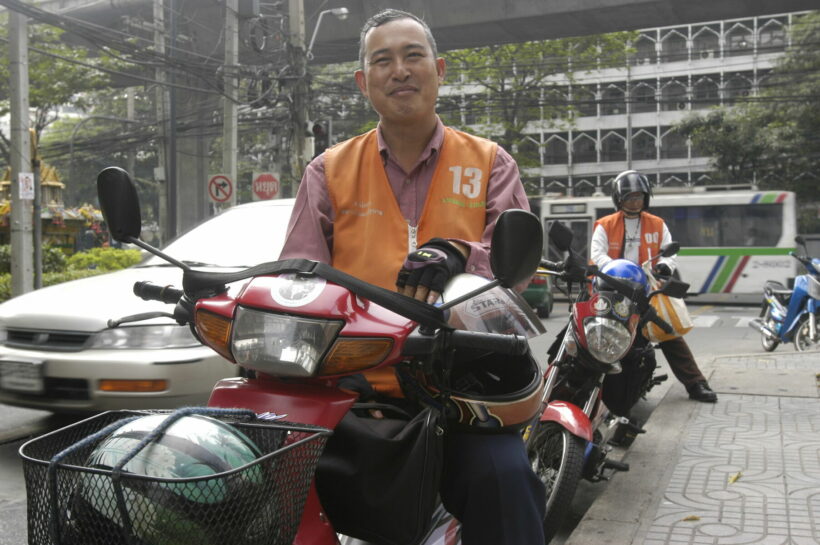 PHOTO: People are dressing as taxi drivers to get a priority vaccine. (via Flickr ILO Asia-Pacific)

After the Titanic sunk, rumours circulated that a man dressed as a woman to sneak about a lifeboat. While the rumour has never been proven as is mostly regarded as false, Bangkok Hi-So elites are being accused of a similar immoral disguise. Thai authorities say they will prosecute anyone, wealthy or otherwise, who is found dressing up as motorbike taxi drivers in order to get priority status for a Covid-19 vaccine.

A group of Thais, thought to be members of Bangkok’s Hi-So wealthy class, had been seen wearing the conspicuous bright orange jackets that motorbike taxi drivers wear while attempting to get a Covid-19 vaccine. According to Health Minister Anutin Charnvirakul, the group was turned away from receiving vaccines at Bang Sue Grand Station after local officers confirmed that they were not taxi drivers.

Taxi drivers are among the groups that are designated as high risk for contracting and spreading Covid-19 due to their frequent interaction with large amounts of people each day. Bike and car taxi drivers, bus drivers and other public transportation workers have been eligible for walk-in vaccinations since late May at Bang Sue Grand Station, where 5,000 vaccines per day are scheduled to be vaccinated.

A team has been ordered by the Land Transport Department to investigate these disguised queue-jumpers and prosecute anyone caught impersonating a taxi driver to get a vaccine. Some believe that it’s mostly wealthy Hi-So people, the same people often blamed for spreading Covid-19 from the clubs of Thong Lor to the entire country, who are renting the orange vests from actual motorbike taxi drivers in order to appear eligible for a walk-in vaccine.

Another fraud instance saw locals in Khlong Toei selling vaccine appointment coupons for 3000 baht to foreigners still waiting for a vaccine appointment. The Health Minister spoke out against black-market buying and selling of vaccines and appointments reiterated that there will be plenty of vaccines to go around for everyone, and people should not attempt to cheat the system.

King Cotton
16 minutes ago, Thaiger said: . . . dressing up as motorbike taxi drivers in order to get priority status for a Covid-19 vaccine. Chain them to the stocks in Lumphini Park for a month . . . that'll learn…

Investigation launched into death of woman who received AstraZeneca vaccine