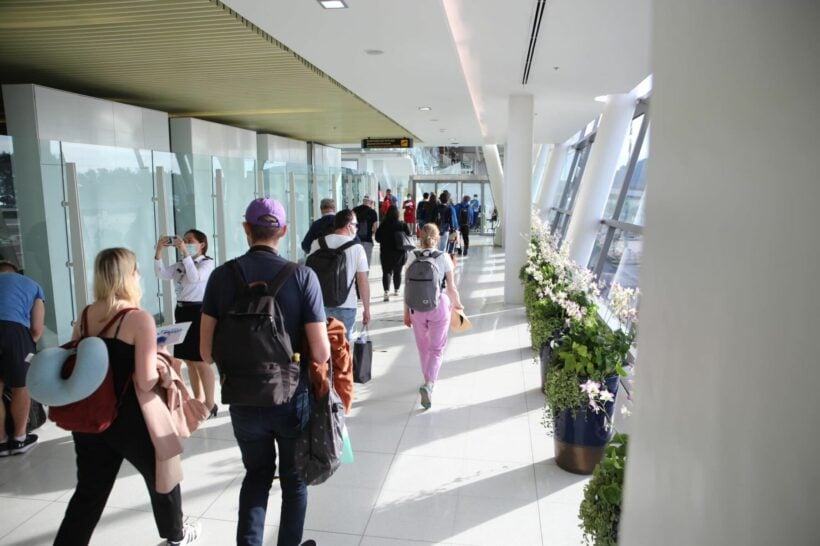 The Tourism Authority of Thailand says thousands of Russian holidaymakers are stranded in the kingdom as flight cancellations and sanctions over the war on Ukraine hit hard. According to Chattan Kunjara Na Ayudhya from the TAT, there are currently 3,100 Russian tourists stranded on Phuket, over 2,000 on Koh Samui, as well as Russian holidaymakers in Krabi, Phang Nga, and Bangkok.

International sanctions imposed on Russia as a result of Vladimir Putin’s invasion of Ukraine are affecting Russian tourists, with many Russian carriers forced to cancel flights and global payment systems suspending their services. Bhummikitti Ruktaengam from the Phuket Tourist Association says Russian visitors on the island have been badly affected by Mastercard and Visa suspending operations in Russia.

“We have seen instances of difficulty in card payments by Russians in Phuket due to how Mastercard and Visa have suspended services in Russia.”

Bhummikitti says tourism officials may adopt the Russian electronic fund transfer system, Mir, as well as allowing tourists to use digital currencies. With Thailand’s tourism sector only just beginning to recover from the pandemic, Russians were among the largest group of holidaymakers until the crisis in Ukraine developed. Now, according to an AFP report, many Russian tourists find themselves stuck here.

Evgenia Gozorskaia, a psychologist who arrived from Russia on February 27 with her husband and children aged 7, 4, and 2, says the family was supposed to fly home on March 28, but their Aeroflot flight has been cancelled.

“We are very nervous because the children are very small, we don’t have enough money to live here. We want to go tomorrow to the airport, but I don’t know what the situation will be.”

Gozorskaia knows of some Russian holidaymakers who’ve managed to get new flights but says her family has so far not been able to get hold of anyone who can help.

“They say that they cannot do it and put the phone off.”

Russian flights are not banned in Thailand, with the Thai government adopting a neutral stance on the Ukraine invasion. However, Russian carrier Aeroflot has been forced to cancel flights as a result of international airspace restrictions. Tourists are now desperately seeking other routes home, including with other airlines travelling via the Middle East.

Shark
10 minutes ago, Pinetree said: Over 500 Russian leased aircraft lose their certification on 28 March, after that, they will no longer be able to fly internationally. It already start beginning of march. As my wife was supposed to sit…

Fundok
5 hours ago, Shark said: Your funny... Do you actually know how flight registration works... S7 for example does all its registrations through Bermuda - How would they be capable of paying these as no outbound money travels from Russia?…

Shark
4 minutes ago, Fundok said: But since Thailand hasn't closed its airspace for Russian planes it is possible to evacuate Russians using Tupulev or Illyushin planes. that won't be happening and isn't feasible either. So indeed like stated before help…
Janneman
There are still flights from Qatar and Abu Dhabi to Moscow. So Russians can fly back if they want. If I were Russian I would not want to fly back of course. I would try to stay as long as…
HiuMak
TAT more concerned about Russians than Russia's Embassy. Make these Russians Covid Positive and they have the funds from insurance to go back in an exclusive quarantine flight