Sleepless in Sukhumvit. A massive clump of LED billboards in Bangkok’s Thong Lor district has been such a nuisance to residents across the street, with many complaining they’re losing sleep, that an official complaint filed with local police and the district office could succeed in its removal.

Thong Lor is known for its nightlife, with numerous clubs, pubs, restaurants – and bright lights. But the 30 metre long, 8 metre wide LED billboard, flashing advertisements for companies including Tyson chicken nuggets and Johnnie Walker whisky, has been too bright for residents to handle.

In defiance, residents have resorted to hanging banners with handwritten, anti-billboard messages outside their windows to protest the sign and block out its obnoxious light. The block of four-story townhouses — home to a Japanese restaurant, a jewelry store and a massage parlor at street level — looks like a building under siege, with white cloth banners bearing complaints in black and red spray paint hung in defiance against the invasive billboard.

“The LED light board from a big company is installed illegally,” one banner reads. “It causes us to lose sleep!”

Other printed banners depict a family and a cute dog wearing surgical masks as blindfolds to protect their eyes from the blinding light across the street.

“Did this dog do anything wrong?”

What residents really want to know is whether their voice has been heard. In an apparent victory, it appears so. After inspection — and to no one’s surprise — it has been confirmed that it’s indeed illegal to install a big billboard without a license.

Aqua Ad Public, the company behind the LED board, has had to make changes like reducing the panel’s brightness by 80% and turning it off four hours earlier. They will also be fined every day until it’s been completely removed by February 7. 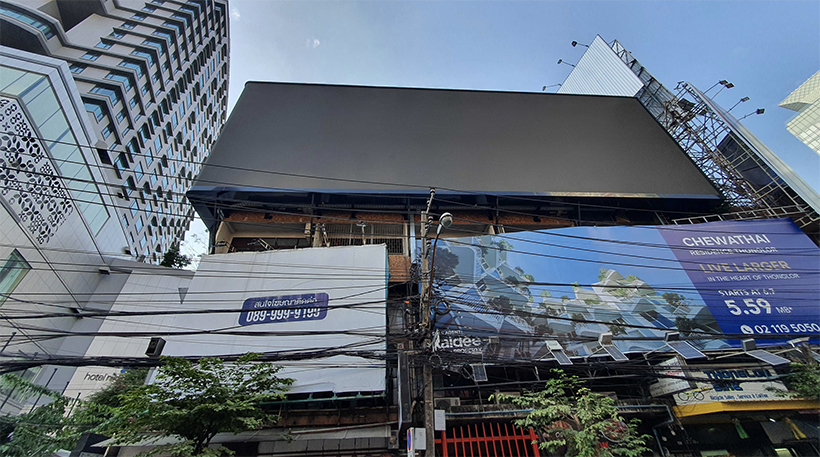 HolyCowCm
Seriously losing sleep? All they need to do is run a loop of sheep jumping over a fence and the sheep can have company names or pictures of products on them. Problem solved. https://encrypted-tbn0.gstatic.com/images?q=tbn:ANd9GcT2gRmLp1-eunWcKf6SbAeEO25dGCJ30HsgUg&usqp=CAU

birdman
17 hours ago, Thaiger said: Johnnie Walker whisky Call me stupid but i was under the impression alcohol ads are illegal? Maybe it depends of the thickness of the envelope? https://en.wikipedia.org/wiki/Alcohol_advertising_in_Thailand
HiuMak
Reminds me of times square
HolyCowCm
2 hours ago, HolyCowCm said: Seriously losing sleep? All they need to do is run a loop of sheep jumping over a fence and the sheep can have company names or pictures of products on them. Problem solved. https://encrypted-tbn0.gstatic.com/images?q=tbn:ANd9GcT2gRmLp1-eunWcKf6SbAeEO25dGCJ30HsgUg&usqp=CAU Didn't…

Bluesofa
2 hours ago, birdman said: Call me stupid but i was under the impression alcohol ads are illegal? Maybe it depends of the thickness of the envelope? https://en.wikipedia.org/wiki/Alcohol_advertising_in_Thailand Ah yes, the old saying 'The quickness of the hand deceives the…