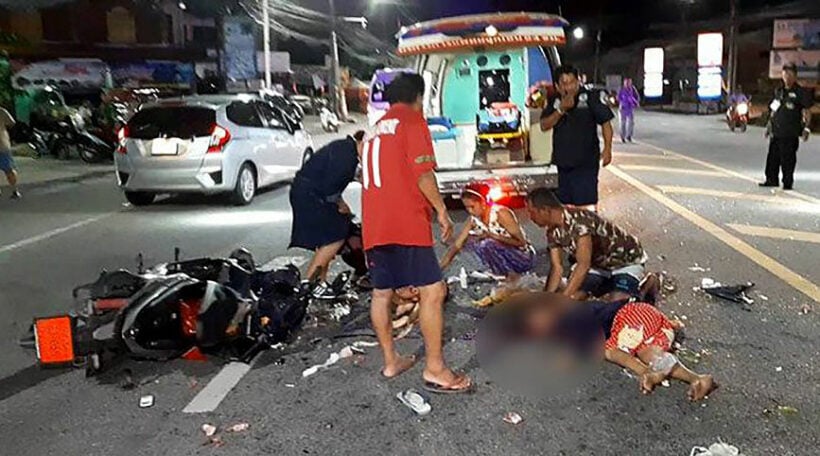 A 6 year old Burmese boy has died following a motorcycle accident when his parents crashed the vehicle onto a pick-up truck earlier this week. He died in the intensive care ward at Vachira Hospital yesterday morning (Thursday)

The accident occurred on September 15 near Soi Pramote, Chaofa West Road, Chalong. The boy’s father, 39 year old Thein Zaw, ended up with a head injury and his left leg was damaged. His mother, 39 year old Poehnin Phyu, suffered severe neck and head injuries and so did the boy. He was rushed to hospital in a coma but his mother was announced dead at the scene.

The father and son were rushed to Vachira Hospital in Samkong where the boy and his father received intensive treatment but the 6 year old succumbed to his injuries.

Witnesses told the police that they saw a Toyota Hilux Vigo pickup truck with Phang Nga number plates, driven by 39 year old Adit Pusuwan, heading from Phuket town towards Chalong circle. They told police they heard the loud noise of the pickup truck increasing speed before stopping at a 7-11 in front of Soi Pramote.

The driver was seen sitting in the car revving the engine with a loud noise. He headed into 7-11 before getting back in and then drove the car to the next U-turn and turned quickly. The motorcycle of the Burmese family was driving in the opposite lane and slammed into the side of the pickup truck.

After the accident, Adit waited for the police to arrive before being taken to police station for further questioning.