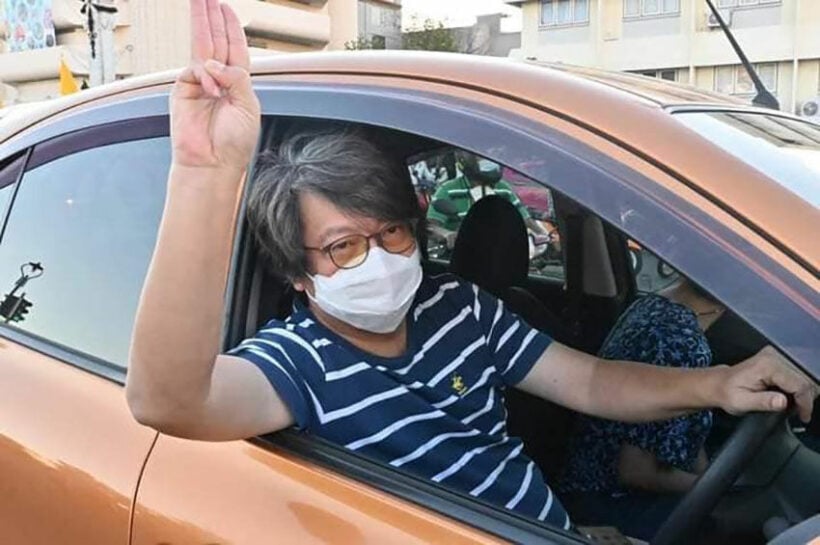 An anti-government protest planned for Bangkok on Sunday will be led by 2 prominent Red Shirt activists, ahead of a no-confidence debate in parliament. The Bangkok Post reports that Sombat Boonngamanong and Nattawut Saikuar will lead the “car mob” rally, which will take place at 2pm in front of the Thai PBS office on Vibhavadi Rangsit Road.

Posting on Facebook, Sombat says the rally is being planned ahead of the no-confidence debate called by the opposition and due to take place in parliament in under a month. Sombat says more anti-government protests will take place during the debate, as he once again called on PM Prayut Chan-o-cha to resign.

“It doesn’t matter how the MPs vote; the people will cast their vote of no confidence. If you don’t resign, this is what we’ll do.”

Last weekend’s car mob resulted in violent clashes between activists and police at the Din Daeng intersection in the capital, with 1 teenage protester in a coma after being shot. The police have denied using live rounds and confusion remains over who shot the young activist and a number of others.

The Bangkok Post reports that 42 protesters have since been arrested, with Piya Tawichai from the Metropolitan Police Bureau saying they face multiple charges, including unlawful gathering to incite chaos, violating the emergency decree and Covid-19 restrictions, and the illegal possession of firearms. Piya says charges may also be brought against the parents of underage protesters, warning that they could face a maximum of 3 months in prison and/or a fine of up to 30,000 baht.

Meanwhile, the mother of jailed activist Parit “Penguin” Chiwarak has once again called for her son to be transferred to Thammasat University Hospital for treatment, after he allegedly contracted Covid-19 while in custody.

cmsally
5 minutes ago, HolyCowCm said: Quote: Piya says charges may also be brought against the parents of underage protesters, warning that they could face a maximum of 3 months in prison and/or a fine of up to 30,000 baht. So…
HolyCowCm
Just now, cmsally said: Oh whoopee, sounds just like Myanmar. Going to be really fun if the parents support the "other side"!!! I'm a parent here with 3 children, but my kids are all over 18 now. But I can tell…

Rain
Is there such a thing as the formally organised Red Shirts any more?

dmacarelli
This administration likely has an approval rating of 1-2%, at this stage. They need to go. And unlike in the past, now the older generation wants to see them go too. The latest vax and covid failures, are all that…