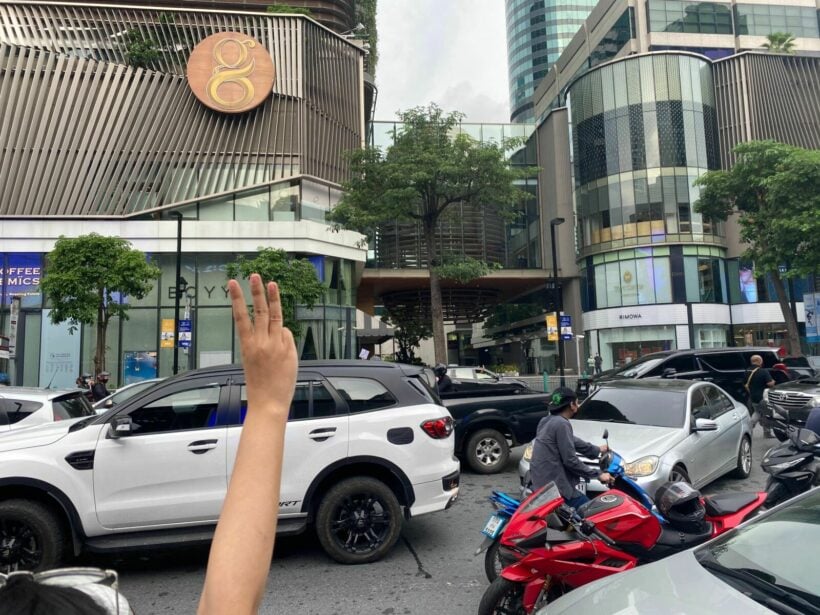 Anti-government protesters have continued their demands for the resignation of PM Prayut Chan-o-cha and his Senate appointments (the entire upper house/Senate in Thailand – 250 members – were hand-picked by the former NCPO military government).

But this weekend they’ve added some new protest techniques and tactics. With lockdown and surging Covid-19, they have taken to car mobs, assembling vehicles to protest. Protesters also launched a new strategy of pressuring government coalition parties to withdraw their support of the PM and his team. The Palang Pracharat-led coalition relies on 3 other main parties and a long list of independent MPs to maintain its balance of power in the lower house.

After months of protests and attempts to propose amendments to remove the PM from power and dissolve the senate, PM Prayut remains unlikely to step down and doesn’t seem swayed by the demonstrations and growing public dissatisfaction. So protesters hatched a new plan to hit the ruling politicians from the sides instead of continuing the unsuccessful head-on attack.

Like a battle in olden times, if you can’t pierce the general’s armour, take down the horse he rides instead. Protesters drove to the Bhumjaithai, Democrats, and Palang Prachachart Thai party offices to urge them to defect from the coalition which would severely weaken the power and influence of the PM.

376 votes are needed to choose a PM and the Senate appointed by PM Prayut’s junta assures 250 votes. Another 126 are necessary and the coalition of 20 parties hold 271 votes, making an airtight majority. But only 119 of those seats are PM Prayut’s main party of support, the Palang Pracharat party. Without the support of the other parties, they would fall 7 votes short of a majority in lower house votes.

Losing that supermajority would also strongly limit the ability to push through legislation in the 500 member House, where losing any coalition party member with at least 22 voting members would put them under the 250 needed to hold the majority. Bhumjaithai hold 61 MP seats and Democrats 48 seats.

Seizing on these statistics, protesters took to the streets in demonstrations and car mobs. At the same time, another group of protesters called Friend Zone launched a Change.org campaign calling for parties to withdraw from the coalition. The petition has surpassed half the target of 5,000 signatures already.

The new car mobs converge cars and motorbikes on protest locations and then parade to political targets making noise and slowing traffic along the way. Yesterday protesters gathered at the Democracy Monument around 1 pm and then rolled their motorcade to the offices of the various coalition parties that are currently aligned with PM Prayut.

The car mob demonstrators submitted a letter to the Democrat Party saying the government’s Covid-19 handling was incompetent and led to unnecessary suffering for Thailand’s people and economy. Next, protesters poured tapioca flour on the ground of the Palang Pracharat headquarters, the strongest element of the coalition. They gave 2 more bags to party officials in a move meant to highlight an unfit party with alleged “unethical histories”.

After, the car mob continued to the Bhumjaithai party where they urged the members to resign from the government in a prepared statement. Finally, they headed to the Central World shopping centre around 4 pm to join and support anti-government protesters in the Thai Mai Thon demonstration. The name means Impatient Thais and the groups converged to completely block the roads all the way to the Pratunam intersection.

The protest ended around 4:30 pm and the group vowed if action wasn’t taken within 2 weeks, they would relaunch their attacks and called for car mobs to organised in other provinces.

Lockdown tomorrow: What to expect in Bangkok and beyond