37% of people support no political party and believe there is no suitable leader for the role of prime minister, according to a new poll by the National Institute of Development Administration. The NIDA poll showed that current PM Prayut Chan-o-cha led the pack of potential candidates, but only 16% of people supported him as their choice for the next prime minister.

2,504 people were surveyed by telephone between December 15 and December 21 for the NIDA poll, with those interviewed representing a variety of people of all ages from 18 up, all backgrounds, occupations, and levels of education spread throughout all regions of Thailand.

The survey found opinion was very divided over who should be the next leader and what political party people favoured; 37% said they did not prefer any political party. About 21% of respondents picked candidates they thought would usher in a new generation of politics for Thailand, while about 24% leaned on experience and expertise. Other key factors mentioned were honesty, straightforwardness, leadership skills and vision.

If the election were today, who would you vote for as Prime Minister?

Which political party do you prefer now? 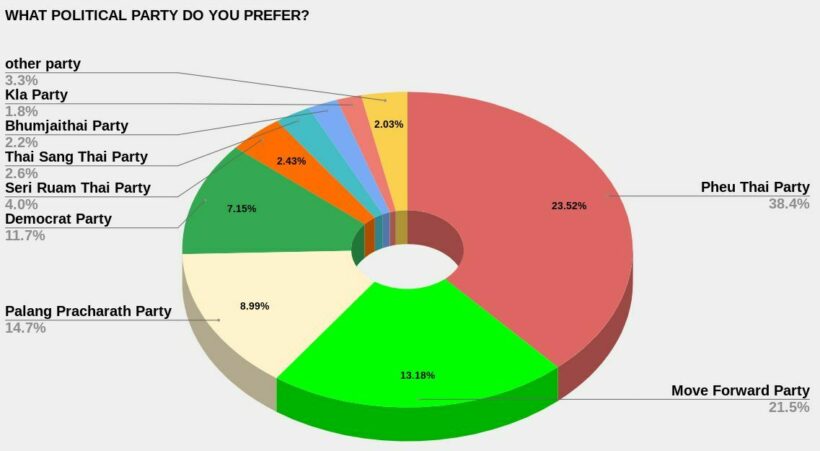 King Cotton
6 minutes ago, Rain said: The place requires a thorough cleansing. My loo brush is on standby!

Rain
2 minutes ago, whitesnake said: Praytwat... sadly, wah, wah, wah, wahhhhhhhhhhhh!! Change your name to "Billy no mates!" Ohhh, how I wish you would read this stuff and the comments and opinions about you! Would it make a difference???... probably…

AdvocatusDiaboli
1 minute ago, whitesnake said: Silly me!! With an attitude like that, you maybe just front runner now for Prime Minister.
Jason
This happens when there is no viable alternative.....at all!!!

Thailand - the 17th anniversary of the Indian Ocean Tsunami