Parliamentary officials have taken down a large signed banner supporting the Future Forward party’s leader leader Thanathorn Juangroongruangkit from the door to the party parliamentary offices, saying it was “inappropriate.”

The parliamentary secretary says the banner was removed to “maintain order in parliament, which is a government office”.

Chuan Leekpai, the parliamentary president, was consulted before banner was removed.

Issara Seriwatthanawut, a Democrat Party list-MP, says that officials respect all MPs and all parties because they were elected by the public.

“But the parliament is an honourable venue and government office, and people should not just write and put up anything they want.”

The banner was signed by FFP leader Thanathorn, and included messages of support from FFP MPs. It was posted on the door in front of the party offices on the third floor of the new parliament building.

Before the ruling on November 20, Thanathorn wrote a message on the sticker: “Future Forward is people and their journey.”

He then raised his hand in a three finger salute, an anti-junta sign adopted by activists, to the cheers of FFP MPs, before heading to the Constitutional Court to receive its judgment. The three finger salute became famous in the Hunger Games movie franchise, as a symbol of rebellion against the oppressive regime in the films. 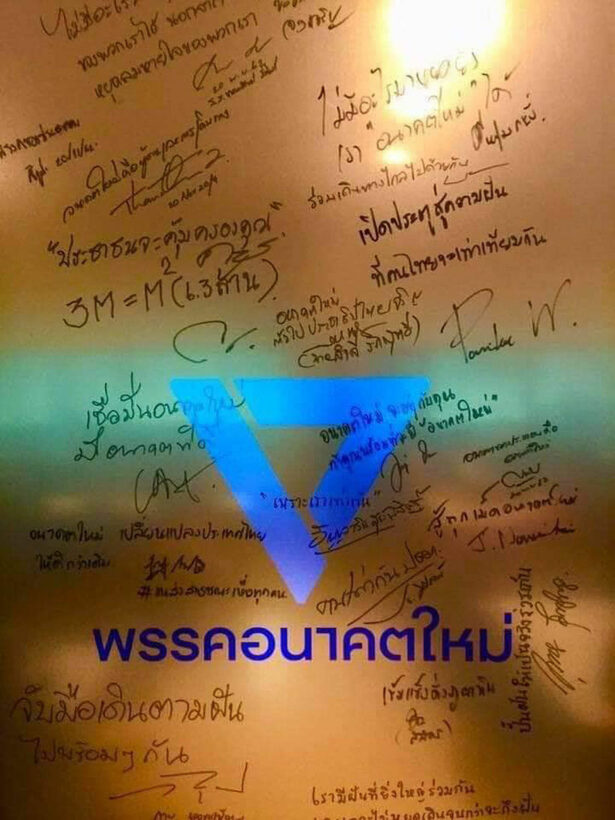