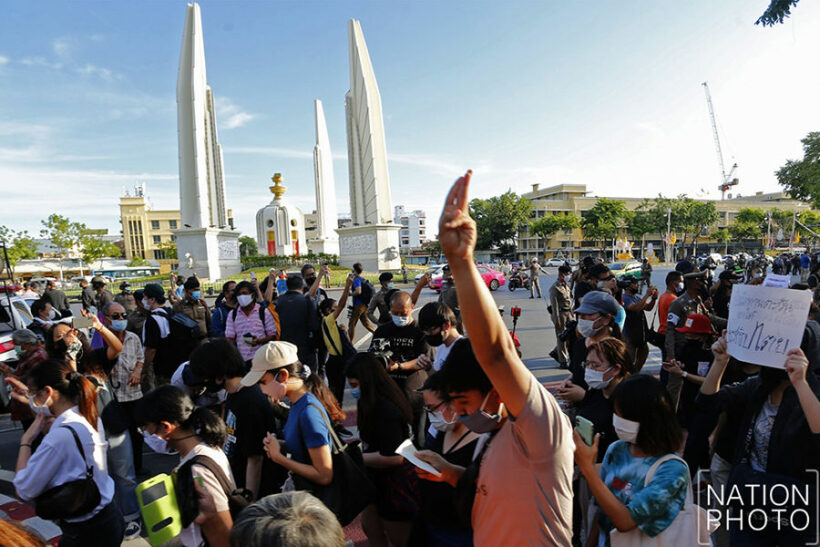 Anti-government protests are intensifying in Thailand, as activists call on officials to stop intimidating people, insisting that Parliament be dissolved, and the country’s constitution re-written. Their demand for constitutional reform is being backed by the Deputy PM, Anutin Charnvirakul.

Yesterday evening, protesters walked around Democracy Monument in Bangkok, with some making mocking comments that they were doing so to admire the flowers planted there. Officials in the capital have recently planted bushes and flowers around the monument, allegedly to create a barrier that might dissuade activists from gathering there.

A report in Nation Thailand says yesterday’s protesters sang a revised version of a song from a Japanese cartoon, using the lyrics to pour scorn on the government and accuse it of wasting taxpayer funds.

The protesters were joined by some red-shirt activists, supporters of former PMs Thaksin Shinawatra and his sister, Yingluck, both of whom are now living in exile. Representatives of the LGBTQ community were also present, having held their own anti-government protest in the same location the night before.

The protests show no sign of easing, with flash mobs and political gatherings taking place around the country, including a demonstration of around 400 protesters in Phuket last night.

Best wishes to HM King of Thailand on this auspicious occasion