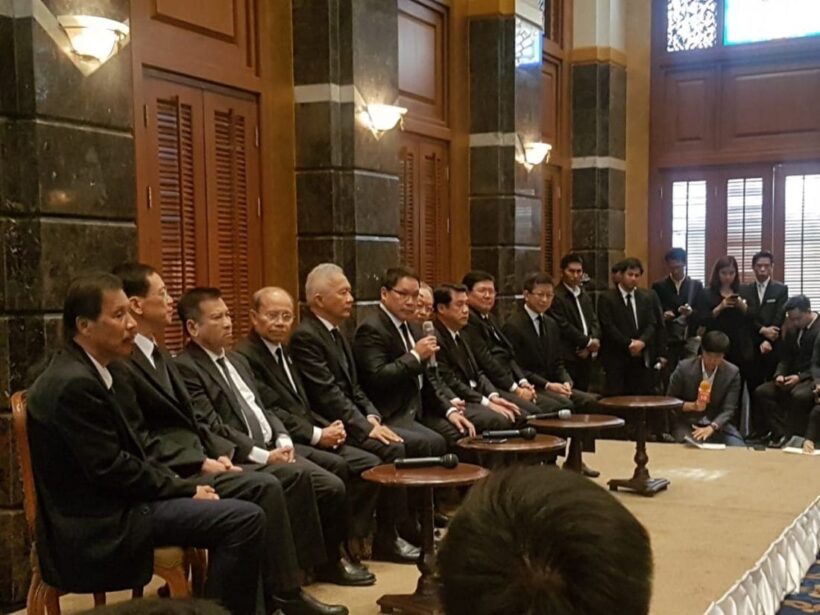 Close. But no majority. The black suits seemed appropriate for the dismal situation Thai politics faces.

With a vote for the next Thai PM tomorrow, where Prayut Chan-o-cha already has the numbers (because of the joint sitting with the stacked Senate), the lower house will be in disarray with no majority government formed. Phalang Pracharat will likely have to try and rule as a minority government with the possibility of getting all legislation voted down by the other parties.

“We’re not setting up a minority government here. Our intentions remain unchanged, in that we want to form a government that is stable and capable of serving the people.”

Five parties – Action Coalition for Thailand, Chat Pattana, Thai Local Power, People’s Reform and Thai Forest Conservation – were at this afternoon’s press conference. If these parties were to combine their seats with those of Phalang Pracharat, there would be less than 200 seats, still far from the 251 needed to legitimise a coalition.

Democrat and Bhumjaithai parties, which hold 103 seats together, were absent from the press conference. The Democrats have yet to decide on whether it will join the coalition, while Bhumjaithai is said to have made a pact with the Democrats to side with them when the decision is made.

Tuesday’s not over yet. The vote for Thailand’s next PM is at 11am tomorrow morning. All eyes will be on Prayut who is unfamiliar with not having his way.