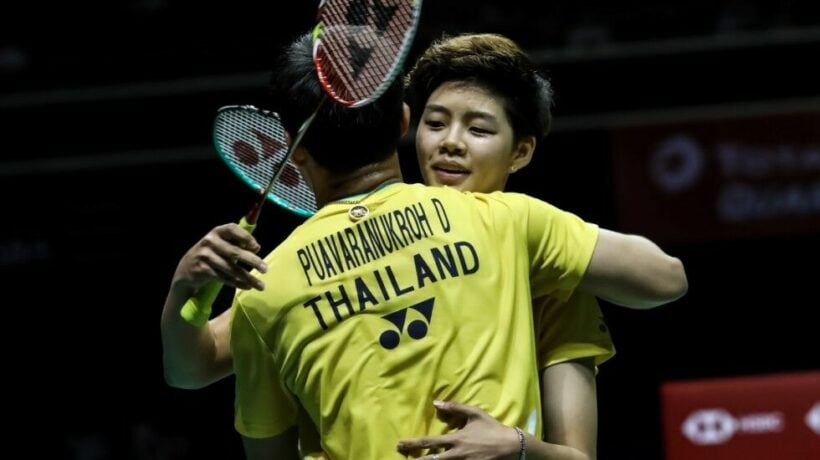 Thailand’s mixed doubles, badminton stars Dechapol Puavaranukroh and Sapsiree Taerattanachai have successfully defended their crown in the World Tour Finals. The duo competed on Sunday in Bali after winning the Indonesia Masters and the Indonesia Open before this week’s finale. They also claimed the Hylo Open in Germany before their trip to Bali.

The Thai world number 2 pair made history in January when they claimed 3 straight victories in Bangkok. The victories included taking home the crown at the Yonex Thailand Open, the Toyota Thailand Open and the World Tour Finals to conclude the 2020 season.

The duo pocketed $126,000 USD after beating out Japan. Sapsiree wrote on her Instagram account that she was proud of her triple champion status.

“World Tour Finals champion !!!!! Words cannot describe how happy I am to have achieved this. TRIPLE CHAMPION here in Indonesia. This means the world to me, thank you everyone for all your support!”

But, Kunlavut Vitidsarn, another Thai badminton player, was unable to win a 2nd title for Thailand in yesterday’s finals. The 20 year old rising star placed 2nd after Viktor Axelsen of Denmark 12-21, 8-21 in the men’s singles deciding match. Axelsen, the Tokyo Olympic gold medalist, was named the BWF’s most promising player last Friday, as he earned his 2nd successive title in Bali in just 43 minutes. He was then also named the BWF’s male player of the year.

Earlier, Korean native An Se-Young secured the 2nd biggest title of her career with a 21-16, 21-12 win over Pusarla V Sindhu. And, she became the first Korean women’s singles player to win a season-ending championship after claiming 3 back to back titles in Bali.

“It’s been a tiring 3 weeks for me. I’m super glad to come away with three titles and I’m very happy about it. I’m really excited about the World Championships and I’m hoping to play without any injuries.”

Kim So-Yeong and Kong Hee-Yong, of South Korea, took the women’s doubles crown while the men’s doubles title was awarded to Takuro Hoki and Yugo Kobayashi of Japan.