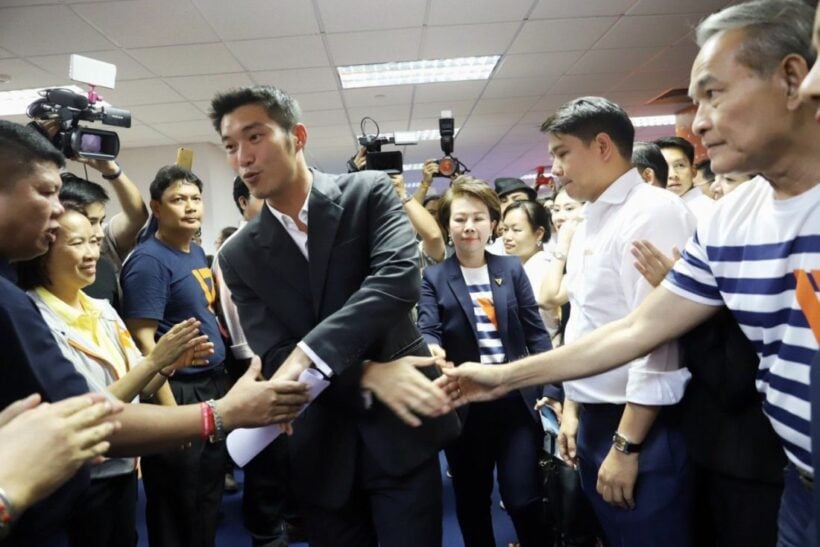 “This is not the time to lose hope. It’s the time to stand against injustice.” – Thanathorn Juangroongruangkit

The Constitutional Court has agreed to hear the Election Commission’s plea to disqualify Future Forward leader Thanathorn Juangroongruangkit from the House of Representatives over his alleged shareholding in media company V-Luck.

The judges voted 9-0 to hear the case, and suspended the anti-junta politician from serving as an MP, a day before Parliament opens after the March 24 election.

Thanathorn has 15 days after receiving the court notice to provide his defence against the allegation.

The EC took the case to charter court, seeking rulings on whether Thanathorn’s membership in the House of Representatives should be terminated and whether he should be suspended from office in the meantime.

The EC petition claimed that Thanathorn held shares in V-Luck, which publishes celebrity magazine Who?, even after he had applied to contest in the general election.

Thanathorn and Future Forward Party had claimed that more than 900,000 shares had been transferred |to his mother, Somporn Juangroongruangkit, in January, a month before the MP candidate registration opened.

The share transfer document also showed the transaction was completed on January 8 but the controversy arose as the business development department recognised the shareholder change only on March 21 – three days before the election. This raised the question if Thanathorn was a shareholder of the media company even after becoming an MP candidate.

MP candidates are prohibited from holding shares in media companies under the Constitution. If found violating the law, the MP’s membership in the lower house should be terminated, the supreme law states.

Once the case was accepted by the Constitutional Court, it also had the jurisdiction to suspend the accused MP from work until a ruling was made.

As a result of the suspension, Thanathorn cannot enter Parliament and will miss the opportunity to vote for the head and the deputies of the House of Representatives as well as the prime minister despite his success in the election.

Critics see the possibility of Thanathorn being disqualified, as a first step to disband the highly popular Future Forward Party and weaken the anti-junta bloc. If the court rules that Thanathorn was not qualified to stand as an MP candidate, the party could also be charged with approving an unqualified candidate, paving the way for its dissolution.

Though his MP status was hanging by a thread, the anti-junta politician said his PM candidacy remained. He was ready to be the PM and lead the coalition.

“This is not the time to lose hope. It’s the time to stand against injustice,” Thanathorn said. “Future Forward MPs remain hopeful. I urge everyone to be hopeful, too.”

The suspension may bar him from Parliament, but Thanathorn said he would continue to work as the people’s representative even outside Parliament.

While disagreeing with the court’s decision, Thanathorn questioned if the process initiated by the EC had been lawful.

He said the EC agreed to take the case to the court even before a subcommittee had completed its investigation. The committee was trying to summon concerned individuals to provide information about the case even after the case had been sent to the Constitutional Court.

The anti-junta politician also called out the EC for rushing to pursue legal action against him. In comparison, in a similar case against Foreign Minister Don Pramudwinai, the poll authority took more than 400 days to approach the court, he said.

Coalition talks. And then there were…. THREE