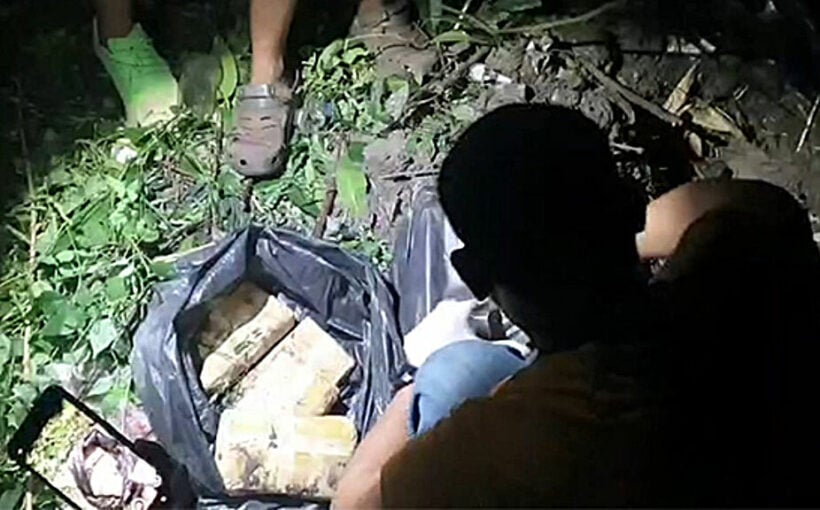 In a drug bust with a few interesting plot twists, 72,000 meth pills were seized in the city of Hat Yai in the southern province of Songkhla this morning, with 2 suspected drug dealers arrested. The pair were arrested in a morning raid on a house in Moo 6 in tambon Khuan Lang according to the chief investigator of the Muang Police Station.

Police say they were acting on several tips from informants that led them to the drug bust. The two suspects arrested in the drug bust of over 70,000 meth pills were 24 and 25 years old and both natives of Songkhla province.

The drug raid began as a flop as police searching the house only turned up 37 meth pills. But during the interrogation of the 2 suspects, the 25 year old admitted there was a secret stash of much larger quantities. He alerted police to the cache that had been buried behind his aunt’s house in Moo 1, tambon Thung Tam Sao.

It was there that police dug up the hidden reserve of 72,000 meth pills. But the drug bust, where raiding one nearly drugless house led to the discovery of drugs at a second house, still had one more twist: The man claims he had just stolen the drugs from the real drug traffickers.

On November 9, narcotic suppression police searched a house on Chuphan Road in tambon Khuan Lang, arrested one suspect and impounded 120,000 meth pills. But according to the suspects in today’s bust, that previous raid should have netted a much bigger haul.

He claims that he walked by the house a mere 300 metres from his home on November 7, just 2 days before the police raid, and noticed the powerful smell of meth wafting from the abandoned house. Following his nose, he scaled the wall surrounding the house and looked inside to see black plastic bags inside.

He jumped at the opportunity and snuck inside the house where he managed to slip away with 3 big bags amounting to a total of 72,000 pills. He made off with the 72,000 pills just 2 days before the unlucky drug manufacturer was raided by the police and lost another 120,000 meth pills. But police had the last laugh in their raid today when they recovered the pills they missed by 2 days in their last raid.

ThaiEyes
This all sounds so simple that these “crack investigators” 😂 solved this difficult case so quickly. Either the perpetrators were incredibly stupid or the police may have been in on it.

Shane
Wow more drug busts in Thailand. At least one industry didnt go under in the pandemic as the drug production is on the boom!!! Never done drugs in Thailand and would never take that kind of risk but I can…

Drug trafficking suspect’s escape foiled by pipe in the road