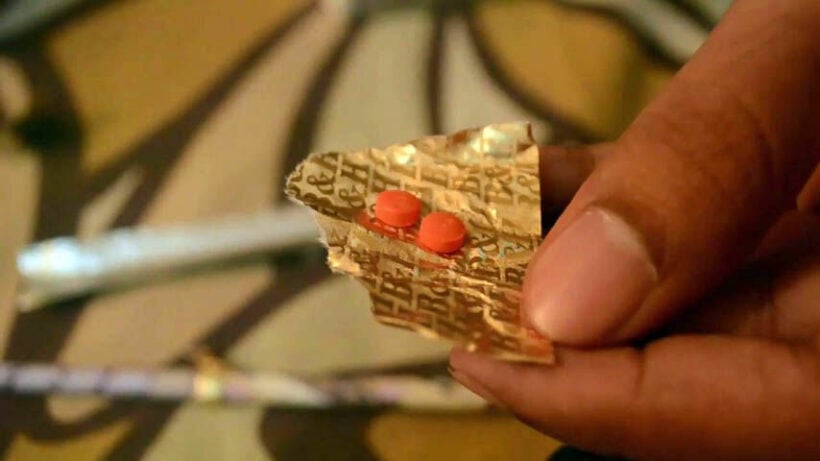 Police in Hat Yai’s Songkhla province seized a total of 470,000 methamphetamine pills after finding the pills hidden on a roadside. They say the pills are worth around 14 million baht on the black market. A tipster informed police of the pills that were hidden in fertiliser sacks. Those sacks were covered by grass and Muslim clothing.

Police waited around hoping to catch the person responsible for hiding the drugs, but no one came. The Hat Yai deputy investigation chief headed the search for the drugs. Now, the team is currently scouring CCTV cameras that covered the highway where the drugs were found.

Methamphetamines are a main ingredient in ‘Yaba’, which is a popular form of meth or ‘ice’ in Thailand. Yaba is made by combining meth with caffeine and other herbs or flavouring to produce a powerful stimulant. Many Thais refer to the drug as the ‘crazy drug’ or ‘madness drug.’ Meth has, historically, been smuggled from across Myanmar and Laos borders, creating a large flow of the drug into Thailand. Police say that domestic production of the drug is also on the rise.

Methamphetamines fall into the Category I illegal drug category in Thailand, with anyone caught in possession of the drug, facing up to 20 years in prison. Thailand has seen a large influx of Yaba users, with many experts citing the country as being in a drug epidemic.

HiuMak
13 hours ago, El_Trauco said: "Those sacks were covered by grass and Muslim clothing. " The packages were wearing a burka? Perhaps muslin would be the correct choice of words here. 🤣 Thaiger should be careful with words 😂

AussieBob
The amount of drugs caught and confiscated in Thailand is astonishing. What that means unfortunately is that there is a lot (LOT) of drugs getting through. Unbelievable and sickening when you think that there is such a high level of…

gummy
54 minutes ago, Lowseasonlover said: Maybe the owners got a tip off the police were watching out for them Or the police gave the owners a tip off so they could declare they found the meths, well half of it…

palooka
In all likeliehood they busted whoever, they paid up with a fat brownie, and the cops get an anonymous tip off and get a drug bust. Win win for all.