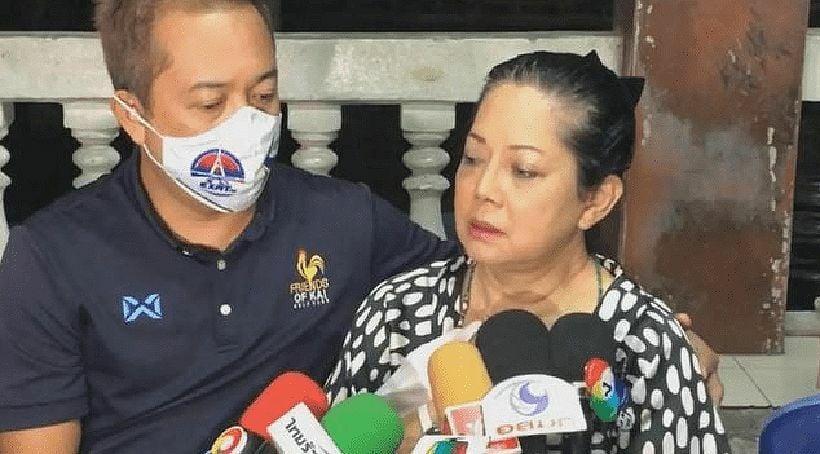 The mother of drowned actress “Tangmo” says she forgives two witnesses to her daughter’s death, and would accept a “financial gift” from one of them.

Panida Siriyuthayothin, the mother of drowned actress Nida “Tangmo” Patcharaveerapong, appeared on Channel 3 yesterday to announce that she had forgiven two of the people who were on the speedboat… the owner and captain of the boat, Thanupat “Por” Lerttaweewit and Paiboon “Robert” Trikanjananun, respectively.

Panida said she forgives the two male companions who were with her daughter on the speedboat the night she drowned — but not the others.

Panida claims she forgave the speedboat owner and the unlicensed skipper for their potential involvement in the death of her daughter on the night of February 24.

The mother made the statements in a televised interview on Channel 3’s the Hone Krasae program. Notably, the two men are the only ones out of the five witnesses aboard the speedboat that night who have so far been formally charged in the case.

Early on in the investigation, police charged Por and Robert with driving an unlicensed vessel and carelessness leading to death. Earlier this week, the two men publicly apologised to Tangmo’s mother at a police station in Nonthaburi.

Tangmo’s mother accepted the men’s apology, but not that of Tanmo’s manager, Idsarin “Gatick” Juthasuksawat, who also attended the televised spectacle, during which the three friends bowed down and presented the grieving mother with flowers while they all held microphones and TV cameras shamelessly recorded their conversations.

She said she couldn’t forgive Gatick because “she hadn’t called to apologise until three days after the incident.” And she has already publicly blamed her for Tangmo’s death, as the investigation enters its second week.

Por, however, reportedly called her the day after the incident to apologise, saying he also wanted to apologise in person. She says at first she remained angry, but Por was persistent, calling every day to apologise until finally her anger subsided and she sensed his sincerity.

“He promised to take care of me as well as ‘Mo did. I forgive him because he has consistently tried to contact me and he knows I am hurting.”

But for Thai netizens who have been sleeplessly following the Tangmo saga, it appears that a mother’s forgiveness comes at a price. She said she would accept compensation from Por, who promised to give her “a requested amount of some 3 million baht”, calculated according to Tangmo’s age and how much she would have made in the future, had she not died.

She was 37 when she drowned in the Chao Phraya River 9 days ago near Pibul 1 pier in Nonthaburi. Her body was recovered two days later.

“Supposing ‘Mo earned 1 million baht from a TV series, if she had lived for 30 more years I could multiply that sum by 30. This still excludes lost income from photo shoots as a model.”

But the bereaved mother of the popular Thai actress denies that her forgiveness has been bought at a price and said she was disappointed with Tangmo’s close friends who have announced their funeral plans for Tangmo without first consulting her.

Read more about the mystery surrounding the death of Tangmo HERE.