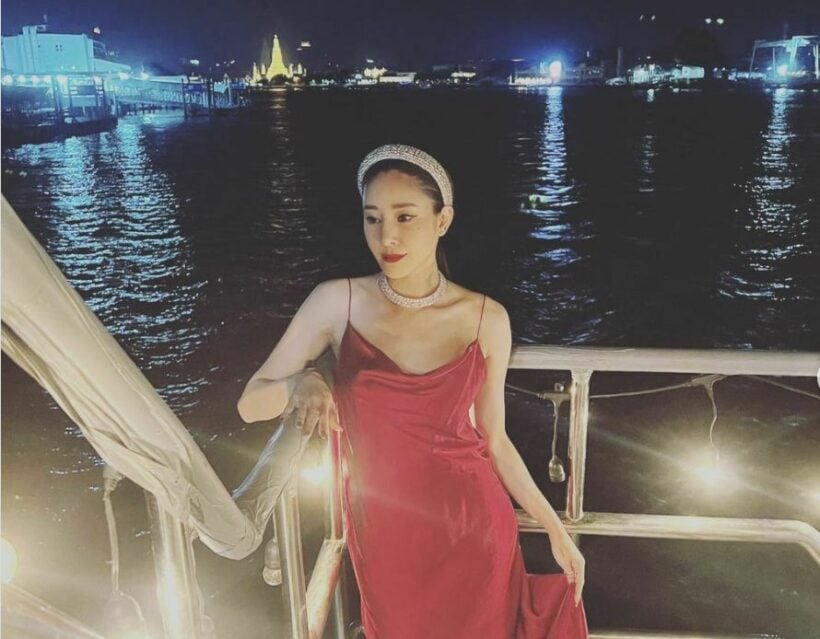 "Red lips and wine sips." Thai actress "Tangmo" poses for a night photo after her first boat ride on the Chao Phraya River in Bangkok on January 28, 2022. Credit: melonp.official Instagram

At an interview evening with reporters yesterday, Nonthaburi police say they are still investigation the case and haven’t yet come to any certain conclusions. Her five boating buddies remain witnesses, not suspects, as an autopsy report confirms Tanmgo drowned, though many key details remained unconfirmed, including what caused the wound on her leg, and what — or who — caused her to topple overboard.

Police have said they are also investigating conflicting claims made by witnesses about what happened on the boat that night. Specifically, only one witness said the boat “lurched” forward in the water, the Bangkok Post reported, casting doubts on what actually caused the TV actress to fall into the Chao Phraya River last Thursday.

Another witness had early claimed that Tangmo fell off the back of the boat while peeing — a claim that was reported widely in the media. It drew much disbelief from both police and netizen sleuths online, who have since been debunked the story as a lie, after police conducted a second round of interviews earlier this week and continue their 5 day reenactment of the events with witnesses.

During the reenactments, police reattached the speedboat’s propeller, which had earlier been removed for analysis. But the propeller accidentally fell off the boat and sank to the bottom of the river. Divers have since recovered it, allowing the reenactments to proceed.

Meanwhile, Thailand’s Department of Mental Health is advising the public to objectively read the news on Tangmo. They’re worried about the psychological impact excessive exposure to the flood of media reports might have on society.

The five friends of Thai actress Nida “Tangmo” Ptcharaveerapong who were on the speedboat when she fell overboard and drowned last Thursday may likely face charges of negligence leading to death and giving false statements, the Bangkok Post quoted a police source as saying.

As the investigation marks one week since Tangmo’s death, the five companions are still considered witnesses, not suspects. Police have already charged Por and Robert with operating an unlicensed vessel and negligence leading to death.

According to witness claims, the popular actress reportedly went to the rear of the boat to urinate, when she fell overboard into the river on Thursday night and drowned. A search team recovered her body on Saturday afternoon, nearly two days later.

But as police cautiously continue their investigation, including a new round of interrogations and a five-night reenactment on the boat, new evidence has emerged, casting significant doubt of witness claims. In short, police are not convinced. Pol Lt Gen Jirapat Phumjit, the head of Provincial Police Region 1, spoke with the Bangkok Post about the prevailing sentiment among investigating officers on Tuesday…

“The cause of death is found at this point to be drowning. To determine what actually caused her to fall into the river, whether it was herself or someone else, will take time.”

“As for the statements given by the five people in the boat, police aren’t totally convinced.”

According to Phumjit, the five companions took physical examinations on Tuesday, after Job was found to have scratches and bruises during a Monday interview with the media. They also submitted their clothes from the night for inspection.

Job was the only one with scratches and bruises, a doctor confirmed at a police press conference on Tuesday. But he also determined they were not inflicted by a person’s nails or caused by a struggle, saying he thought they were about 5-7 days old.

As part of the ongoing investigation, the police have begun a five-night reenactment of the tragedy, in which they plan to take the five one by one on a similar speedboat to try and determine what led up to the actress falling overboard.

The Technology Crime Suppression Division has traced the boat owner Por’s phone, finding a series of phone calls he made to “powerful people” after the incident on the river that night.

During one of the phone consultations, Por admitted that Robert was driving the speedboat when Tangmo fell overboard, an unnamed source from the Provincial Police Region 1 told the Bangkok Post on Wednesday.

Because of his lack of experience manoeuvering the boat, Robert, who does not have a boating license, reportedly lost control of the vessel, lurching it forward. This caused a chain reaction, prompting Nida at the boat’s stern to grab hold of Sand so as not to fall overboard. Afraid of being pulled into the river with her, Sand shook her legs, causing Tangmo to topple into the river, where her right thigh was sliced by a propeller blade of the vessel’s large outboard engine and she drowned.

This week police from Nonthaburi district are continuing the investigation with a new round of interrogations, this time using a lie detector, and a five-day reenactment on the boat, taking each witness one by one to reenact what happened on the river that night.

The autopsy report released on Wednesday concluded that Tangmo drowned in the river. But forensics experts were unable to confirm key details in witness claims, including whether Tangmo was peeing when she fell in or was pushed, what caused the wound in her leg and whether the wound occurred before or after she drowned.

Meanwhile, police are meeting in Nonthaburi province north of Bangkok near the scene of the incident to discuss the information gathered from the investigation thus far. They have also interviewed fishermen in the area, who reportedly saw the boat speeding and turning sharply in the water. Police say they will continue meeting Thursday.

No announcement has been made yet regarding the results of their ongoing investigation.

It is not yet known the exact circumstances on the boat that led up to Tangmo’s toppling overboard.

Furthermore, the widely circulated photograph showing Tangmo hugging her manager at the back of the boat that was taken supposedly at 9:56pm on the night of the incident, appears to be taken much earlier before the lights of Rama VIII Bridge automatically turned off at 9 o’clock. It is not clear why the photo’s data was changed to reflect a later time, or by who.

This may also explain why the water was so dark at the time Tangmo toppled into the river, as the witnesses have claimed.

On Monday, speedboat owner Por publicly announce his intention to become a monk during a TV show hosted by Tangmo’s friend and fellow actor Kanchai Kamnerdploy. All the other witnesses also joined the program, except for Robert, the skipper, who admitted to hospital for hypertension. He also has not yet participated in the boating reenactments, citing high blood pressure, the Bangkok Post reported.

The next day, Robert and Por, along with Tangmo’s manager, Gatick, attended a public apology to Tangmo’s mother, Panida Sirayutthayothin, at Mueng Nonthaburi Provincial Polce Station. She reportedly accepted the apologies from the men, but not from Gatick. When asked her why she didn’t jump in the water to save her drowning daughter, Gatick replied…

But netizens were quick to point out a video on Gatick’s Instagram showing her swimming in a pool with her young daughter.

As the truth of Tangmo’s tragic death is exposed, confessions of the witnesses are expected to come soon, along with formal charges of negligence leading to death and making false statements.

Benroon
Here's a favour to the journalists covering this story - look into who the father is of the boat owner ......
Alavan
On 3/6/2022 at 12:34 PM, Marc26 said: My stepson is a Junior at Thamassat He is likely going to go for his Masters or maybe even medical school My wife just said last month she wants him to finish school…
Marc26
1 hour ago, Alavan said: Children taking care of elders. That is normal in Thailand Paul. They don’t have a pension system and retirement as we, with the exception of some functions as police. A friend from 25 years ago…
HolyCowCm
On 3/6/2022 at 2:49 PM, Marc26 said: Oh I help out my Thai family quite a bit But I've done just as much for my own family, or more So helping out my Thai family was never a question or…