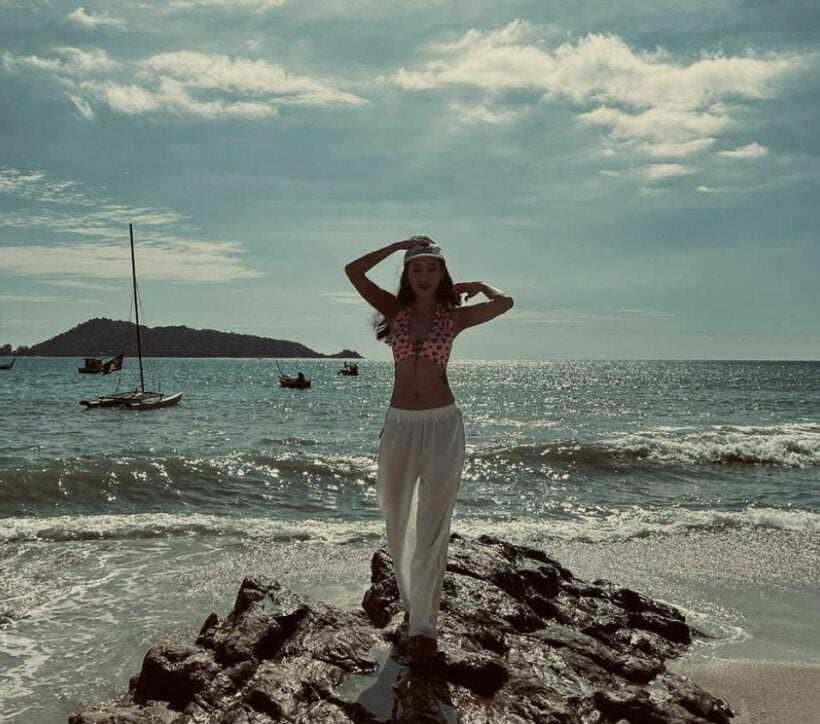 "The sun set to rise again." Tango poses on the beach in Phuket. Credit: melonp.official | Instagram

Nonthaburi police have interviewed another 8 witnesses in their ongoing investigation into the death of Thai Christian actress Nida “Tango” Patcharaveerapong, who drowned in the Chao Phraya River after allegedly falling from a speedboat last Thursday night.

Earlier this week that all five witnesses face charges of negligence leading to death and giving false statements. they have not yet determined whose negligence caused the actress to fall from the boat, Pol Lt Gen Jirapat Phumjit, Commissioner of Provincial Police Region 1, told the Bangkok Post.

“No theories have been ruled out so far, whether it was an accident or if there was something else behind the incident…”

Police have new questions a total of 29 witnesses, including 4 of the 5 friends who accompanied Tangmo on the boat, according to the Bangkok Post. Most recently, Surattanavee “Bow TK” Suviporn, a friend of both Tangmo and her manager, was one of them.

Robert, the unlicensed skipper, has not yet been interviewed because he has been ‘sick’ with high blood pressure, according to the Bangkok Post. He was allegedly driving the boat at the time Tango fell in the river, police say. He also reportedly has not participated in the nightly reenactments with police on the Chao Phraya River.

Investigators reviewing the boat’s GPS data say they believe Tango fell off the boat sometime between 10:29pm and 10:34pm. Moreover, forensic samples collected from the boat are currently under review, including DNA and fingerprints.

Jirapat said he believes no evidence is missing from the boat, which was not at the scene when police first arrived Thursday night. Police confiscated the boat from the NBC Boat Club in Nonthaburi on Friday morning last week.

“We aim to make [the investigation] as thorough as possible with the help of forensic evidence.”

Police are also reviewing a video of the late Thai actress, which was recorded on her manager’s phone that night, after Thai netizen sleuths pointed out a mysterious male voice shouting angrily off-camera.

In the video, Tango is seen nonchalantly posing with a glass of wine and playing with her hair, which a man can be heard off-camera shouting…

“We haven’t received the amount claimed. And in any case, I insist that everything here is being done by the book.”

Investigators have also requested the phone records from the five witnesses, which have already been collected by Technology Crime Suppression Division, the Bangkok Post reported.

As Tango’s family, friends and fans mark one week of mourning since her death, Prime Minister Prayut Chan-o-cha is reportedly urging police to expedite their investigation, which has entered its eighth day with no definitive conclusions.

In her final Instagram post on melonp.official one week ago, the Thai Christian actress posted pictures of herself posing on the beach in Phuket before the sunrise. Her photo captions reads…

palooka
“We haven’t received the amount claimed. And in any case, I insist that everything here is being done by the book.” Whose book? Doesn't really deny money passed hands either. (If translated correctly)

palooka
1 minute ago, Soidog said: It’s their way of negotiating a price. By claiming it hasn’t happened, they are sending a message to say the figure is not enough. I don’t know why the RTP don’t just issue a price…

DoUKnowWhoIAm
22 minutes ago, Soidog said: It’s their way of negotiating a price. By claiming it hasn’t happened, they are sending a message to say the figure is not enough. I don’t know why the RTP don’t just issue a price…
LoongFred
Nothing but blind speculation. Needs to be evidence based. Failure of not having facts shows biased judgment. I suggest that people check the facts first. If the facts show that the police misconduct they need to be brought to justice. …
Charlie
I think Trump was the cause.