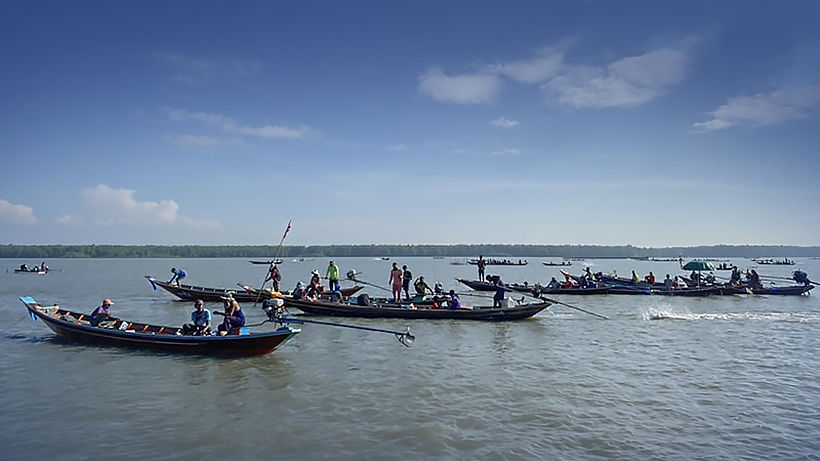 Cockles – and Thailand’s “cockle wars” – are back in the news this week. Fishermen in the southern Surat Thani province are calling for clearer guidelines on cockle catches, as their conflict with shellfish farmers drags on despite intervention from provincial authorities.

Last Wednesday, a man rode in on his jet ski, firing a gun as some 300 fisherman raided his illegal shellfish farm. Fishermen and cockle farmers have been at odds for a while, with some claiming ownership to parts of the Gulf of Thailand near the Phunphin coast. Legally, they have no leg to stand on.

Pasit Buaklai, a fisherman in Kanchanadit district, says authorities need to clearly define the areas where small-boat fishermen can harvest cockles, also called “hoi kraeng,” aka blood clams. Pasit says he drove his boat from Kanchanadit to Phunphin district to harvest the blood cockles, only to find that he and other fishermen were still blocked by farmers, who defied provincial authorities’ ruling that the sea 5.4 kilometres off the coast is public domain.

In May, hundreds of Surat Thani locals surrounded a police car after hearing reports that officers had demanded a 5 million baht bribe from a local cockle trader. Provincial police quickly suspended the officers and promised a swift and thorough investigation

Cockle farmers have invested millions of baht setting up breeding grounds off the coast, and have erected bamboo fences around the areas they illegally claim, with huts on stilts, to keep out the fishermen, who claim the right to harvest the profitable shellfish in public waters. The conflict reached a new high (low?) Wednesday when investor Santi Nuansaen fired a pistol into the air from his jet ski to drive fishermen away from his cockle farm in Phunphin district waters. He was later charged by police with discharging a firearm in public.

About 200 coastal boats returned to the disputed locations yesterday and today, with both farm owners and authorities keeping a close watch on them. Surat Thani province sent navy personnel, police and defence volunteers into the areas to prevent further conflict.

The chief of the Provincial Disaster Prevention and Mitigation Office warned both sides that authorities will not hesitate to take legal action if there is further violence.