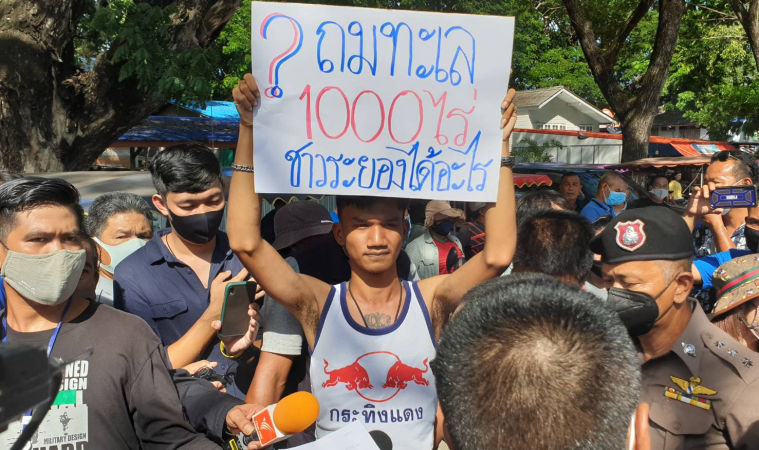 Police arrested a student while he protesting outside a market PM Prayut Chan-o-cha was visiting. The student Panupong Jadnok, known as Mike Rayong, was holding up a sign saying “1,000 rai sea reclamation. What will Rayong people get?”

Apparently Mike’s land reclamation protest didn’t have much to do with his arrest. He had an arrest warrant for his role in the August 10 protest at Thammasat University in Pathum Thani. The student was also arrested on August 8 for his role in the July 18 protest at Democracy Monument. Mike says his protest yesterday didn’t have anything to do with politics, he just wanted to question government officials about Rayong’s reclamation project.

A report from the Bangkok Post did not say that charges the student faces. In previous reports, protesters at the university rally may have violated Section 112 of criminal code, known as the lèse-majesté law, by offending the Thai Monarchy.

While many activists in the nation are speaking up about the political opinions by holding large protests and calling for democracy, police are investigating to see whether the protesters broke any laws and are issuing arrest warrants.  Police say they are on the lookout to see if any protest leaders, who were previously arrested, are out violating their bail conditions by taking part in protests.

Police have also said they used a “electronic monitoring device” at a recent rally as a security precaution and it would only be used if the police noticed something suspicious. The Post did not go into detail about what exactly the equipment is.

With a mass pro-democracy protest planned for September 19, police are now training specialised crowd control units to prepare for the rally.