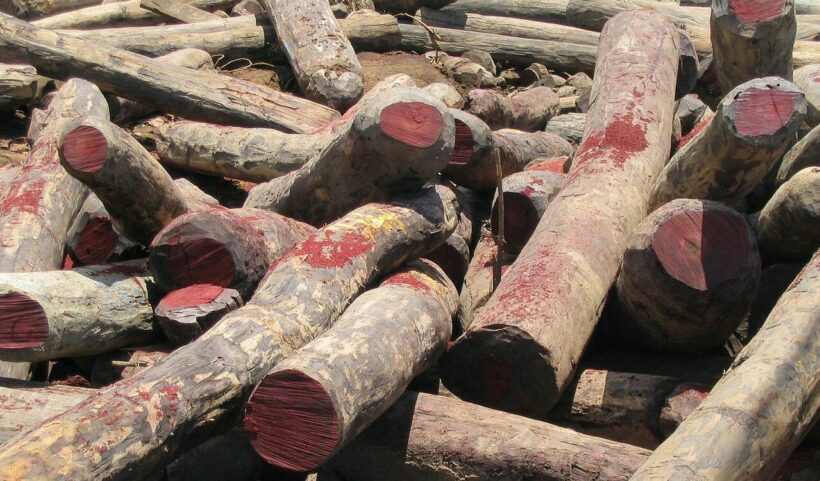 A senior Thai official in the north-eastern province of Mukdahan has been arrested, along with his assistant, on bribery charges. The provincial chief of the natural resources and environment office, Suradet Akkarach, and Ms Pan Saengviroon, are accused of receiving 2 million baht for facilitating the return of confiscated Siamese Rosewood timber to a merchant from Laos.

The timber, housed in 11 containers and valued at around 600 million baht, was impounded by the authorities in Mukdahan in 2006, on suspicion it had been illegally obtained. The case was heard in the provincial court, then the Appeals court, and then the Supreme court, which acquitted the defendants and ruled that the timber should be returned to its owner, EL Enterprise.

The arrests of 58 year old Suradet and Pan came about after a Laotian timber merchant filed a police report on February 24, accusing Suradet of offering to return the timber for a payment of 2 million baht.

The police subsequently set up a sting operation for when the merchant, named as Kamsavai Pommachan, arranged to meet Suradet and Pan to hand over the money. As soon as Pan took delivery of the cash, both suspects were arrested. According to a Thai PBS World report, Suradet insists he was not involved in the bribery, but Pan has confessed to the charges.

Panya Pinsuk from the Central Investigation Bureau, and Chivaparb Chivatham from the Royal Forestry Department, gave a press conference yesterday, in which they confirmed the arrests of both suspects and the seizure of 2 million baht in 1,000 baht notes, as well as 4 smartphones.

According to Chatupat Burupat from the Natural Resources and Environment Ministry, Suradet is an ex-employee of the Royal Forestry Department and would have known how to go about returning the confiscated timber.

Following the arrests, the Minister of Natural Resources and Environment, Varavut Silpa-archa, says he has ordered Suradet to be transferred to an inactive post while a committee investigates the case against him. The minister acknowledges that there is proof of bribery, but says an investigation is still required to ensure fairness. He says he expects the committee to report back within 15 days.