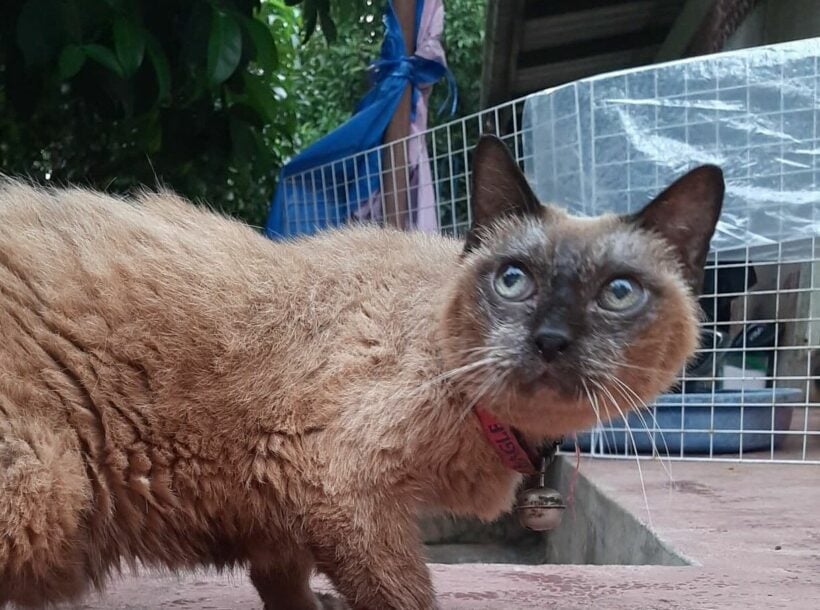 A 34 year old Siamese cat in Chanthaburi is the oldest living cat in the world, many claim. The cat, known as “Great Grandmother Wad,” is still very strong, but has trouble walking and her memory isn’t the best, her owner says. She’s a bit senile.

Thai media spoke to 57 year old Wanna Kodkarika, the cat’s owner, also known in Thai as a “taad maew,” meaning “cat slave” because of the way cat owners tend to cater to and spoil their cats.

Many claim Great Grandmother Wad the oldest living cat. The oldest cat in the world that ever lived was Creme Puff in Austin Texas. The cat lived for 38 years and 3 days from 1967 to 2005.

The cat’s mother was found back in 1986 in front of Wanna’s home in Chantaburi. A year later, the cat gave birth to 2 kittens. One kitten died, but Wad survived.

“When Grandma Wad was young, she was good at catching small animals in the garden. She liked to get tender loving care and was playful, but could become fierce when she got threatened by other animals. She was attacked by dogs twice, resulting in her bone problems.”

Great Grandmother Wad gave birth to a litter of 4 kittens. Those cats then had kittens, and some of their kittens had kittens, but Wad outlived them all.

The 34 year old cat, which some say is equivalent to a 160 year old human, still walks, but has a bit of trouble. She weighs just 2 kilograms. Her teeth aren’t as strong as they used to be. The cat now eats soft, canned food instead of her favorites: fish heads and fish with rice.

And to keep up with the latest trends, the world’s oldest cat is now on Facebook, TikTok and YouTube.