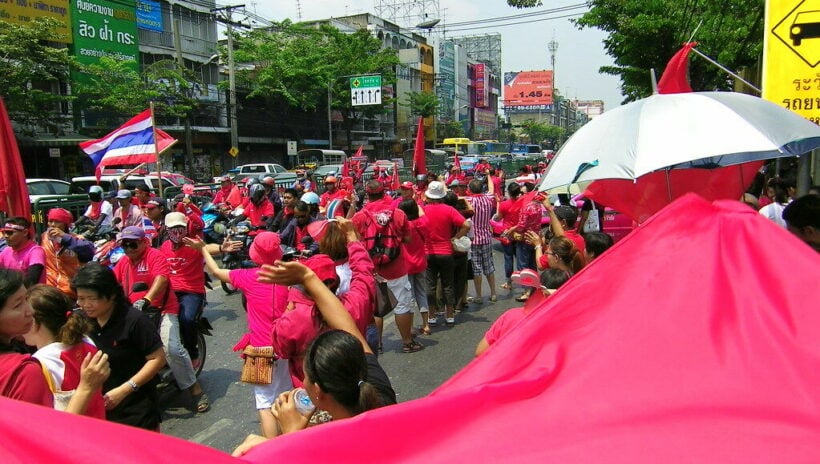 A member of the pro-democracy Ratsadon group is staying in jail as his requests to be released on bail are being denied by Thailand’s Criminal Court. 30 year old Chukiat “Justin” Saengwong, was charged with lese majeste, inciting unrest, and breaking the Emergency Decree while taking part in protests.

Police are accusing Chukiat of placing a paper with offensive words on a portrait of Thailand’s King in front of the Supreme Court in Bangkok’s Phra Nakhon district. They say he was caught on CCTV, which then showed protesters allegedly setting fire to the portrait. When police asked them to stop, they allegedly threw bottles, and other projectiles.

Now, an MP applied for Chukiat’s release on bail by using his position, valued at 1.1 million baht, as security, but was denied. The court’s reasoning is that he may do the same thing again, if he is released. Protests are starting again today over the detainment and arrest of such demonstrators demanding they be released. The Ratsadon group announced its plans to rally today on the Facebook page of The United Front of Thammasat and Demonstration group, with organisers pledging to ensure the safety of participants.

“March 24, 2021 bring your bags and tie your shoelaces. There will be a rally stage this time and of course rally speeches. Security will be ensured for all participants. Keep an eye out for further updates (on the planned protest]) #March24Mob #End112 #FreeOurFriends.”

At least 33 people were injured at a rally in the capital on Saturday when police deployed rubber bullets, tear gas, and water cannon in an attempt to disperse protesters. Reporters and police officers were among the injured, with one reporter having to be hospitalised for a head scan after allegedly being hit by a rubber bullet.

The Foreign Correspondents’ Club of Thailand has issued a statement condemning the shooting of reporters at protests over the weekend. Saturday night’s protest, around the Sanam Luang area of the capital, ended with at least 33 people injured, including 3 reporters.