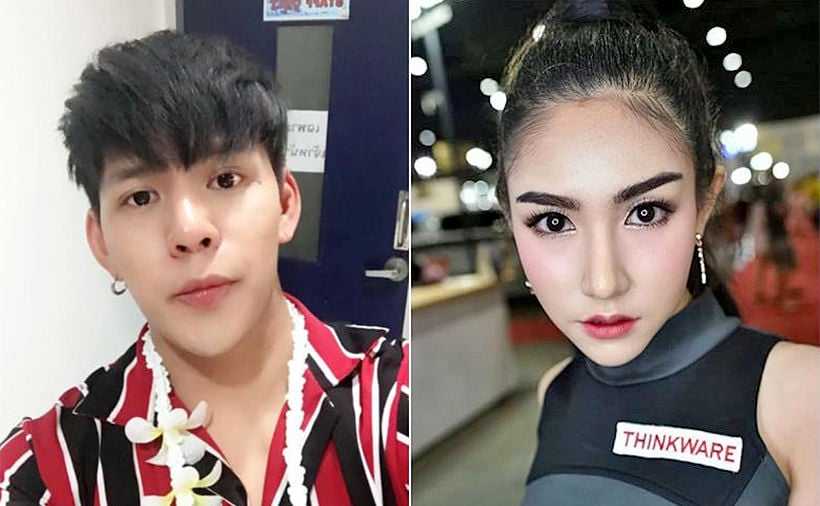 The mysterious death of ‘pretty’ Thitima Noraphanpiphat in Bangkok last week is gripping Thailand and highlighting risks women who work in the service and promotions industry face every day. Her dead body was found in the lobby of a Bangkok condo.

Police have arrested a male model in connection with the 25 year old’s death last Wednesday after CCTV footage appears to show him dragging her lifeless body into an elevator and leaving her on a sofa in the lobby of his apartment.

But the main suspect, 24 year old Rachadech Wongtabutr, the last person Thitima was seen alive with, was initially questioned by police but subsequently set free after he denied any criminal involvement. Police are also investigating others who could be involved, including the hosts of the party and guests.

“Security camera footage appears to show Rachadech entering his apartment building with what appears to be an unconscious woman and taking her up to his room on the 6th floor. Hours later footage allegedly captured Rachadech carrying the woman back into the lobby and placing her on a sofa.”

Interest in the case from social and main-stream Thai media became intense after police confirmed that Rachadech had posted photos of Thitima, aka. ‘Lunlabelle’, on social media on the night she died. The release of CCTV footage from his condo added to the more rumours and speculation about Thitima’s death.

“Suthipong, the police chief, said that Rachadech acknowledged that he took Thitima to his apartment but denies the charges, saying he thought she was just drunk and didn’t realise she had died.”

Thitima was a model, her family’s main bread-winner, a product presenter and party entertainer – better known in Thailand as ‘pretties’ – and had been paid to serve drinks at a party on September 16 at a house outside Bangkok in Nonthaburi, on the opposite side of the Chao Phraya.

Since then Thitima’s death has dominated headlines in Thai media. The circumstances surrounding her final hours are now the centre of intense Thai rumours and gossip.

Then on Thursday, police arrested six more people who attended the same party after another woman – ‘Dear’ – complained to police that she was forced to drink so much that she ended up unconscious. She told police woke up naked the next morning. She was also hired to serve drinks at the same party, police said.

The case is highlighting Thailand’s glittery service and promotions industry where women – known as “pretties” – are hired for events such as auto shows, parties, and in bars and nightclubs.

Sexual harassment and abuse are common, and the women are often pressured into drinking excessive amounts of alcohol. Thai society looks down upon the work of “pretties” and the stigma often puts them off filing official complaints or seeking legal recourse if they are abused.

Thitma’s death is sparking calls for new laws to be introduced to protect those working in the industry and awareness campaigns to change attitudes surrounding their work.

Police report that a preliminary autopsy report shows that Thitima died from “extreme alcohol intoxication.” The findings indicated a blood alcohol level of an astonishing 418 milligrams per 100 millilitres.

An attorney working for Thitima’s family have told CNN that they are waiting for a new autopsy to be completed by October 2. They claim her death was “suspicious”.

FILE PHOTO: VIP clubs and their wealthy customers may have violated rules and led to Covid-19 outbreaks

Investigations are being demanded by a corruption watchdog into Thai politicians infected with Covid-19 after allegedly attending venues in the Thong Lor entertainment venues in Bangkok that have now emerged as the ground zero for the Coronavirus third wave in the Kingdom.

The Anti-Corruption Organisation of Thailand are being asked to investigate the latest Covid-19 outbreak, noting in a Facebook post that the second wave was also linked to illegal activities, spreading through illegal migrants and other visiting gambling dens. This third wave is also angering those who see the wealthy elite and powerful politicians frequenting high-end bars and not following Covid-19 safety protocols.

Mana Nimitmongkol, secretary-general of ACT argues that the ministers visiting these clubs did not behave “ethically”, and it’s part of a larger problem. He is pushing for legal action against not only club owners, but against police, public health officials, and even the Bangkok Metropolitan Administration for failing to enforce laws to protect against Covid-19.

Investigations into whether the code of ethics had been violated were requested to be carried out by the National Anti-Corruption Commission, the Ombudsman and the committee on ethical standards.

As entertainment venues have been ordered closed for at least 2 weeks, Mana proposes that along with restrictions, a hotline to report rule-breakers should be set up, and all people should be held to the same standard without exception.

The president of the Rural Doctors Society agreed, saying that especially important is the need for Covid-19 infected public officials to disclose their personal timelines to reassure the public and assist in contract tracing. It is feared that little or no action will be taken to investigate and punish powerful rulebreakers.

One controversial infection was that of Transport Minister Saksayam Chidchob, rumoured to be infected from Thong Lor nightclubs, but later shown to be in another province at the time. The entertainment venue outbreak was not completely innocent though, as details emerged that the minister’s infection was in fact passed to him via an aide who had frequented clubs in Thong Lor.

Chuvit Kamolvisit, a former massage parlour owner turned activist, has been outspoken on the issue, calling for investigations into high-society VIP clubs like Krystal Club and Emerald Club, who allegedly flaunted restrictions and ended up with dozens of Covid-19 infected staff members.

The Metropolitan Police Bureau chief had said that legal action was pending against these clubs for the virus spreading.

PHOTO: Demonstration attendance has been falling in the face of Covid-19, coups and crackdowns.

While protesters against the Thai government are continuing as they have for endless months, attendance is lessening in the face of crackdowns, coups and Covid-19. The throngs of 10,000 plus protesters, mostly energetic youth, that waved The Hunger Games 3 finger salute and demanded change in Thailand last summer have thinned to a few thousand or less these days.

The government isn’t in the clear yet though, as the protester’s calls to replace the current government, lessen the power of the Thai monarchy, and draw up a new constitution are still popular ideas. But a number of factors are causing protester size and vigour to wane.

The second wave of Covid in December quickly curbed the daily demonstrations for fear of spreading the virus. After that, the coup in Myanmar on February 1 has brought massive protests with international attention shifting to the growing humanitarian crisis just across the border. On top of the pandemic and the Burmese coup, the Thai government has taken a much more hardline approach to protesters in recent months.

Police began fighting back against mass demonstrations, dispersing crowds with water cannons, tear gas, and rubber bullets. And after 2 years of leniency, the government has begun prosecuting people under the strict lèse-majesté laws, where offending the monarchy can carry harsh punishment including a jail sentence of up to 15 years.

Anon Nampa, a human-rights lawyer, and Parit “Penguin” Chiwarak, a student activist, have already been arrested under this law and held without bail. Arrests like these have been demoralising for the pro-democracy movement, and have scared away a lot of Thai protesters. Many have shifted focus to more immediate efforts to demand the release of the detained protest leaders.

Even with the crowds shrinking, the protests have already brought about change, bringing once unspeakable conversations into the national conversation, and keeping pressure on Thailand’s leaders. Opposition is growing, with efforts to push no-confidence votes and amendments to the constitution being constantly proposed and advocated.