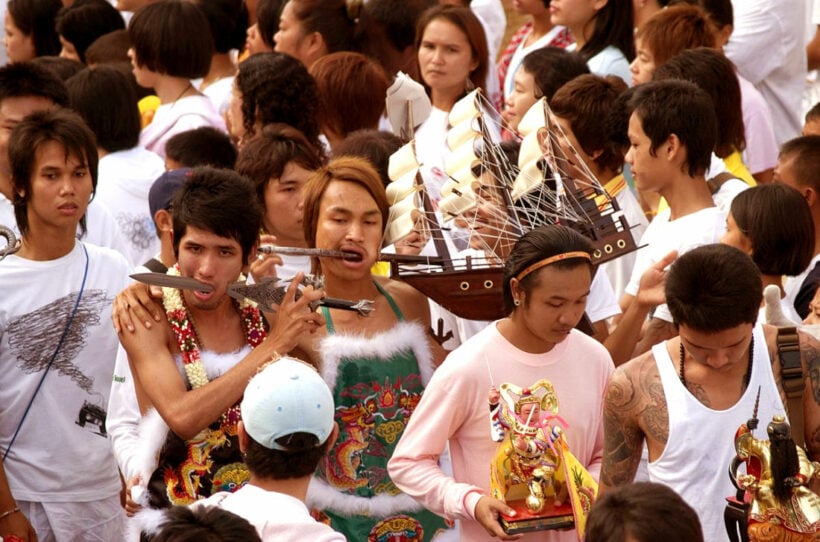 Phuket’s vegetarian Festival is an annual event steeped in ancient Chinese mysticism and fused with local island traditions and Buddhism. It’s a cacophony of noise, spiritualism, body piercing and rather bland vegetarian food. For the tourist or expat that witnesses the parades, fire-walking and ceremonies for the first time it’s a shock to the senses.For local Thai-Chinese, it’s a riveting annual festival. But some locals fear that it has changed too much to cater for the cameras and tourists.

I wonder how many people, including tourists and locals, actually know the history and meaning of the Vegetarian Festival, because it is nothing like it was in the past.

If people were to judge the festival solely by what they see and hear now, then their reaction will most likely be one of fear, dismay or misunderstanding.

A lot of people avoid viewing the ancient traditions because of the crowds, traffic, excessive and dangerous use of firecrackers, and teenagers riding their motorbikes around like gangsters.

However, just riding from my house in Thalang to Phuket Town during a time of day when there are no processions, I can still experience all of those annoyances.

The younger crowd wear the traditional white outfits, symbolizing that they are following the rules of the Vegetarian Festival. However, though they are eating vegetarian food, they are still smoking, drinking and behaving badly, ripping down the streets at high speed.

Another difference between the traditional festival and what we have now is the way in which firecrackers are used. Traditionally, firecrackers are thrown at the ma song to scare evil spirits away. However, people now throw them at oncoming motorbikes, pedestrians and automobiles with potentially dangerous results.

On top of all of this, most places celebrating will play a Da Bei Zhou (a Buddhist chant) to help people feel at peace, but now we hear the chant remixed and polluted by the annoying cliche of drum and bass.

The main point of the Vegetarian Festival is to slow down, pray to the Chinese Gods at the shrines, and to be kind to yourself and other people. However, the Vegetarian Festival has turned into an intrusive and so-called ‘trendy’ event where people think it’s good enough to wear white and eat vegetarian food for 10 days. They have forgotten that the event is not just about cleansing one’s body; it’s about cleansing your mind and spirit as well.