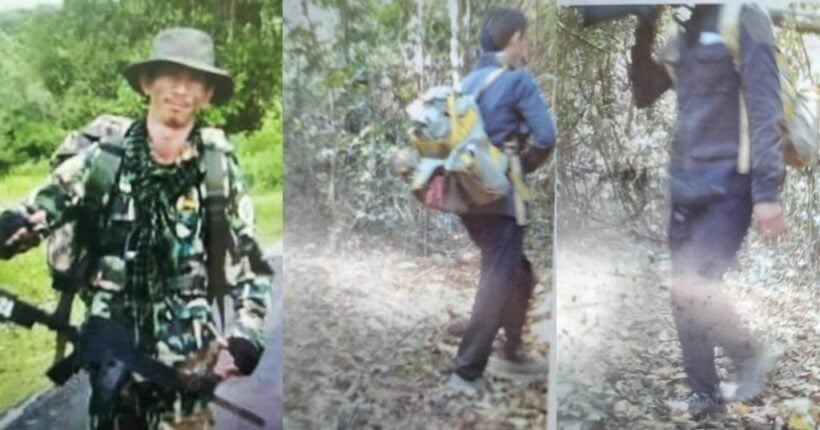 Officers in the Isaan province Buriram are still searching for the senior forest ranger who allegedly shot and killed his ex-wife’s son Sunday night. The victim’s family says the ranger called them after the shooting, saying he threatened to murder the entire family. He is believed to be hiding in a forest near the Dong Yai Wildlife Sanctuary.

The 45 year old forest ranger, Pitpiroon Piraphop, allegedly fired shots at his estranged wife’s house using a shotgun from the sanctuary. His ex-wife, her new partner, and her sons tried to flee the home, but the 20 year old son was shot in the neck and killed.

The forest ranger is believed to have fled into Dong Yai forest with a shotgun and pickup truck that both belong to the Dong Yai sanctuary. The truck was found at Lam Nang Rong reservoir yesterday, but the gun has not been recovered. More than 150 police from Non Din Daeng Police Station, together with other forest rangers and reinforcements from other police offices, were enclosing and searching the forest to hunt for the suspect.

After the shooting, he called back to his ex-wife, saying he would murder the whole family soon. Police officers have been on standby and are closely monitoring the entire family, both day and night, to ensure their safety until the suspect is arrested.

The authorities have shared photos and information on the suspect with locals. They urged everyone to be careful and take a close watch because he is identified as a dangerous person. Those with information are asked to report via 044-606250 or 097-6916939.

DoUKnowWhoIAm
17 minutes ago, Thaiger said: The forest ranger is believed to have fled into Dong Yai forest with a shotgun They did the first blood, not me!