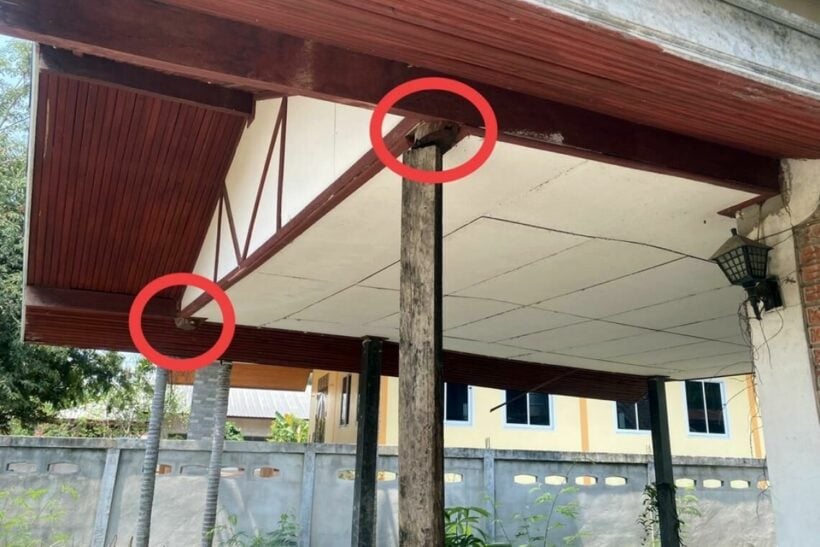 A thief who claimed to be a Tokay gecko catcher poisoned two pet dogs and stole two house pillars made from valuable rosewood in the early hours of yesterday morning in the Isaan province Surin.

42 year old Saman Sooklom, who rents a house in Surin, woke up yesterday to find that his two pet dogs were dead and the two Siamese rosewood pillars holding up the awning of his house had been cut down and stolen during the night.

Saman expects the thief to be a stranger who came to his house on an old motorcycle two days prior to the incident. The man was shining a torch and pretending to catch a Tokay gecko. Tokays are known for their distinctive call, aggressive nature and painful bite. Saman didn’t expect any foul play at the time.

Saman explained that usually his two pet dogs would bark at strangers, but he didn’t hear any barking on the night of March 7 because his dogs had been poisoned and died. Saman says the thief turned the lights and CCTV cameras around so he wouldn’t be seen. Saman found motorcycle tracks at the entrance of his house and expects the thief got in by climbing on his washing machine, which had footprints on it.

Since 2016, Siamese rosewood has been protected under the Convention on International Trade in Endangered Species. Since then, the market value of this durable, termite-resistant wood has skyrocketed, selling for up to USD$100,000 (3 million Thai baht) per cubic metre.

Thailand’s remaining rosewood trees are protected by the Thai army and many rangers have been killed in shootouts with Timber smugglers. With high demand from China, the illegal Siamese rosewood industry is kept alive.

Chatogaster
If he gets caught, I hope A) that he serves some time for trespassing and theft, and B) that he gets to swallow - in copious amounts - whatever he used on the dogs (I'm flexible about the order of A…

Man arrested for kidnapping a 6 year old boy, forcing the child to beg on the streets