The former OrBorTor President in Tung Maprao, Tai Muang district in Phang Nga, Suppasak ‘Sak’ Pokaboot, has reportedly fled from his house after having resigned from his position following grave allegations of pedophilia and incriminating video evidence this week.

The police went to speak to Suppasak this morning and found that the house was locked. There were a few workers outside that told police that several officials had visited the house in recent days for questioning over the allegations and video.

They said that Suppasak had fled from his house and hired them to take care of the property. Soon after, his wife and child also left the house with the family’s van, they told police.

The workers didn’t have a key to get inside as they were only responsible for the outdoors.

Suppasak was earlier exposed in a pedophilia and child molestation case after a video clip of him kissing and touching a 12 year old girl went viral.

She explained that ‘Uncle Sak’ knows her family well, as her mother and father used to work for him. Once the parents were divorced, the two sisters went to live with their grandmother and ‘Uncle Sak’ has become a helping hand, especially when they all had an accident and couldn’t work or go to school.

She explained that one day the man told them that he had visited a traditional Chinese doctor several times and couldn’t heal his sickness so the doctor suggested him to find a young girl who he can kiss and touch as it would help cure his condition. She didn’t agree to his lies and advances but says her sister apparently did.

The grandmother of the two girls also agreed to be the witness in the case today and is also being investigated by police as they unravel the tawdry details and history of the man and his relationship with the family. 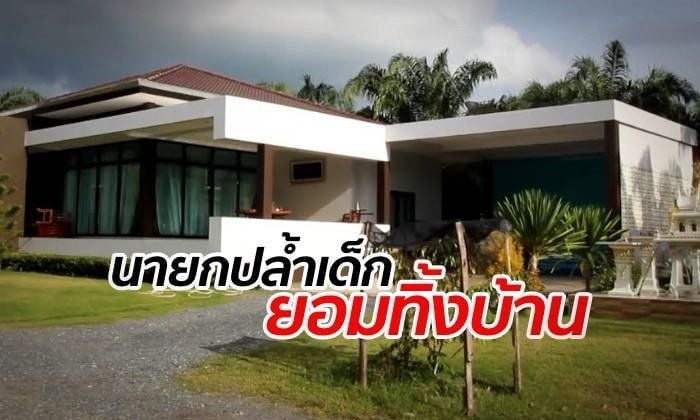 No one at home. The former OrBorTor President’s home in Phang Nga