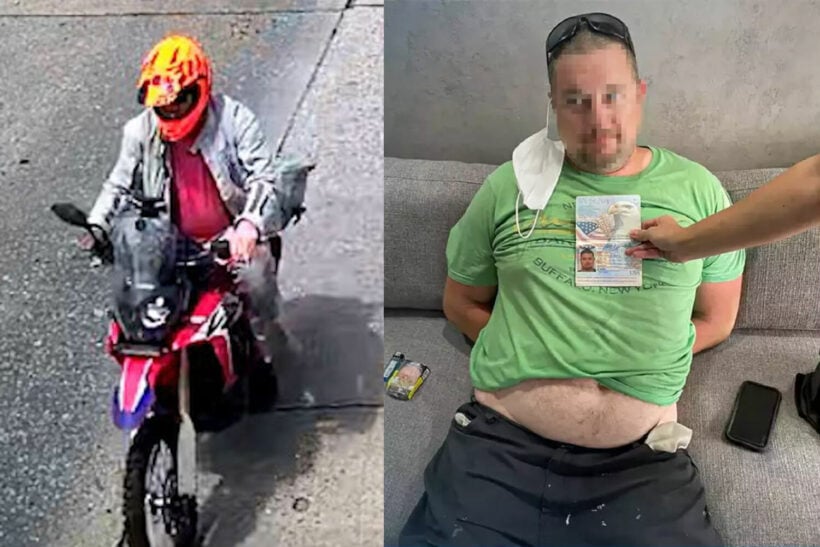 FILE PHOTO: An American man has been arrested for the rape of masseuse and attack of a 12 year old girl.

A 37 year old man was taken into custody, accused of brutally beating and raping a masseuse as well as assaulting and attempting to rape a 12 year old girl in an attack shortly after. The man, who was originally suspected to be Australian, has now been identified only as an American named ‘Robert’.

He was arrested today on Soi Nana in Bangkok where Provincial Police Region 4 had tracked him to a condominium and taken him into custody. He is accused of beating the 45 year old masseuse on Monday, captured on CCTV, before driving off and attacking the young girl at a roadside stall selling honey the same day. He is now being held in Bangkok until police can transfer him to Khon Kaen police.

The 12 year old girl identified her assailant in the attack as the same man who earlier that day left a masseuse at Dee Na Massage on Rob Muang Road in a pool of blood, so violently assaulted that she has been barely conscious and unable to give police a statement all week. The girls said he did not wear a face mask and was wearing the same clothes and riding the same motorcycle that was seen in CCTV footage from the massage parlour beating.

The attack took place on Mittraphap Road in Ban Phai district at 1 pm on Monday, just hours after the massage parlour attack. The family of the young girl have 2 roadside stalls 500 metres apart selling honey, one manned by her mother and the other by her father with the girl’s help. The father had gone to a forested area nearby to gather wood to repair the stall when the attack occurred.

Further investigation and interviewing of the young girl in the attack will continue after the weekend with police being joined by child welfare officials and psychologists. They are seeking a court-issued warrant for the man’s formal arrest in the incident.

[Trigger warning: the attack of the girl is described in detail below.]

Around 1 pm, the American man reportedly passed the girl about to dine at a shed near her stall on a motorbike without license plates before making a U-turn and grabbing the girl by her shirt collar. She screamed for help and he pulled her down to the ground by her collar. He allegedly groped her while speaking in non-Thai words and allegedly tried to kiss. As she continued to yell for help, he allegedly punched her in the mouth.

The man allegedly attempted to further his attack, unzipping his pants and taking out his genitals. Fortunately, a passing oil tanker drove by and the driver spotted that attack, honking his horn while stopping his truck. The loud noise spooked the man who then fled on his motorbike.

Faz
A number of off topic posts, replies and quoted posts have been removed. The topic is about one man who happens to be a US national, not the educational levels in the USA.

Fluke
1 hour ago, Viggen840 said: You mean 'allegedly' committed, don't you? Allegedly is a word that bottom-feeding lawyers have managed to slime[sic] into legal proceedings over the years and is now gleefully used by media as well.  If this assault…

dmacarelli
19 hours ago, Viggen840 said: Over and above those of the country they are in? So a scrotum from say California can happily puff away on marijuana in the streets of Bangkok or Phuket safe from Thai laws? I don't…

Mamachigawa
On 10/3/2021 at 9:42 PM, Viggen840 said: Over and above those of the country they are in? So a scrotum from say California can happily puff away on marijuana in the streets of Bangkok or Phuket safe from Thai laws?…

dmacarelli
On 10/3/2021 at 6:01 AM, Lowseasonlover said: It says in the article they will be taking him back to KK to be charged a re enactment could be dangerous like the one the other week when over 200 locals turned…