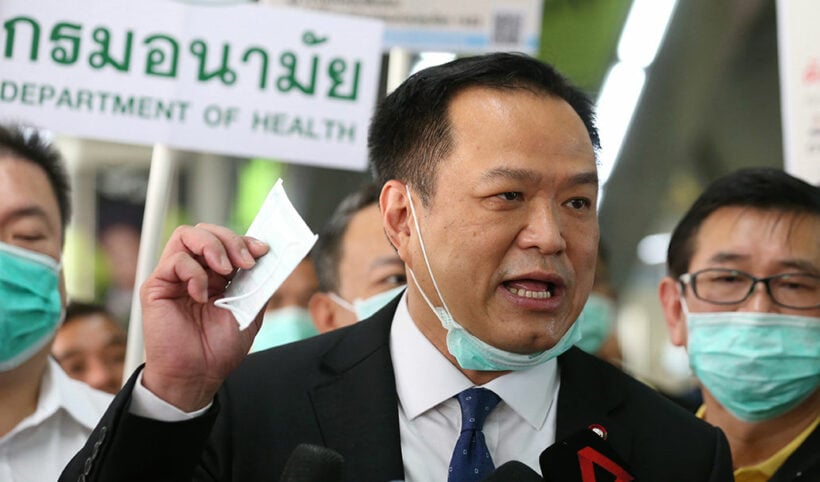 As the global epicentre of the Covid-19 coronavirus pandemic shifts from China to Europe, racism is not far behind, least of all here in the virus-hit kingdom of Thailand.

With new restrictions on inbound travellers now in place, including mandatory health certificates and proof of health insurance, caucasians (white skinned westerners aka. ‘farang’) are increasingly being blamed for the country’s growing outbreak.

The total confirmed cases reached 721 today as 122 new cases were announced, a drop from yesterday’s record 188. Thailand has so far reported only one Covid-19 related death.

Health Minister Anutin Charnvirakul has publicly blamed “dirty” Caucasian tourists for spreading the virus. His xenophobic comments have been shared with a level of local online approval.

“Right now, it’s winter in Europe, and with the coronavirus outbreak, they have all fled the cold and the virus to come into warm Thailand. Many of them are dirty and do not shower,” the minister tweeted in Thai at the start of the month.

The tweet was deleted hours later, after it was widely condemned. It was not immediately clear where Anutin, a construction tycoon rather than medical professional, got his 90% statistic for mask-wearing Thais.

The Health Ministry later said that while the Twitter account in question did indeed belong to Anutin, his staff sometimes post tweets on his behalf. Anutin himself, who is often questioned about his prime ministerial ambitions, has not publicly apologised for the tweet.

On February 7, Anutin, whose family runs the Sino-Thai Construction company, said on-camera during a Health Ministry media event in Bangkok (while clearly not wearing a mask)…

“Those damn Caucasian tourists, that is something the embassies should be notified of, and the public as well, that they are not wearing medical face masks. They need to be kicked out of Thailand!”

Such racist remarks risk hitting the nation’s already devastated tourism industry, which accounts for as much as 14-18% of GDP and has previously relied heavily on high-spending Western travellers.

Officials have provided conflicting, overlapping and often contradictory information regarding travel restrictions, especially over key issues like whether they have or haven’t been imposed on certain countries. While health authorities say most of the new cases have been local transmissions among Thais who recently travelled to heavily infected countries, including Italy, Japan and South Korea, westerners are nonetheless bearing much of the blame.

A March 15 The Thaiger wrote and editorial criticising Anutin for his racist taunts to westerners.

Tourists and expats have expressed fear that the health minister’s anti-Western messages could spark racist attacks against them in the street.

The sudden rise of anti-Caucasian racism follows an earlier surge of anti-China sentiment when the virus first appeared in Thailand in January. Then, Thai officials tried to repress, rather than stoke the xenophobia.

In Chiang Mai, police told a Thai restaurant owner in February to remove a sign in front of her eatery which said in English: “We apologise we are not accepting CHINESE customers. Thank you.”

The Thaiger recommends wearing a face mask in public whilst in Thailand as a public assurance for Thais and an acknowledgment of their preference to wear a face mask, whether of medical value or not, at this time.

Cash handouts to Thais being proposed