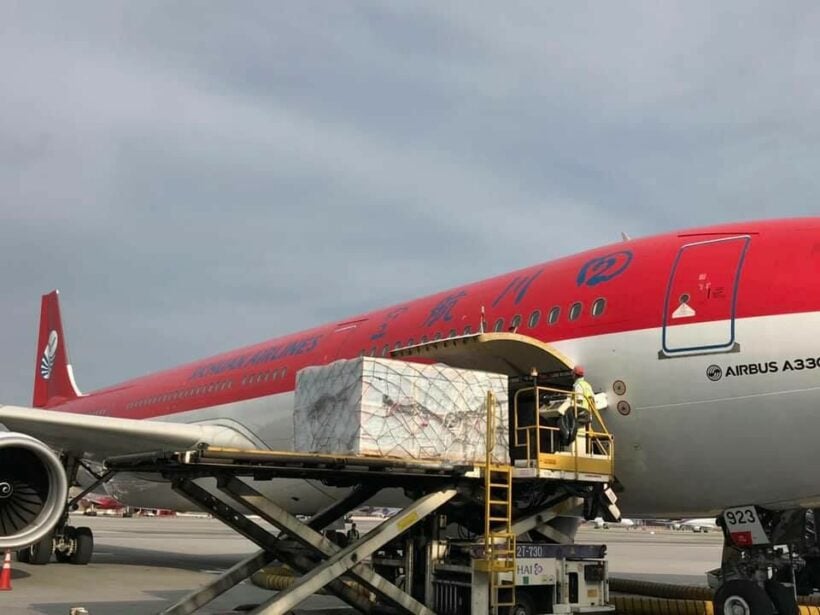 Today marks the delivery of another 2 million of the Chinese-made Sinovac Covid-19 vaccines arriving in Thailand from China. This delivery is the second this month, following the June 5 arrival of 500,000 vaccines from the Chinese manufacturer, donated by China to help Thailand in its vaccination drive that launched June 7.

The arrival of these 2 million additional Covid-19 vaccines brings the total number of Sinovac vaccines in Thailand up to 10.5 million doses of the Chinese-made vaccine.

The Chinese Embassy in Bangkok announced the arrival a few hours ago on its Facebook page. They said that 2 million doses of the Sinovac vaccines have now arrived in Bangkok. This is the 12th Sinovac shipment sent from China to Thailand.

China has committed to sending 11 million Sinovac vaccines to Thailand between the months of June and August. This shipment, along with the 500,000 previously received at the beginning of the month, makes 2.5 million vaccines so far during that period.

In addition to the Sinovac vaccines, other brands have been rolling into Thailand in recent days. Sunday saw the first shipment of the second Chinese-made vaccine, Sinopharm, which delivered 1 million doses on Sunday through a deal with Chulabhorn Royal Academy to import and administer the vaccine privately. They are being sold for 888 baht per vaccine including insurance.

Before that, 1 million AstraZeneca vaccines were received by the Public Health Ministry on Friday of last week. Minister of Public Health Anutin Charnvirakul reported that Thailand expects to have continuous weekly shipments of the AstraZeneca vaccine. There have reportedly been 8.5 million vaccines distributed across Thailand so far with 7.9 million administered already.

The country is racing against time as they take measures to get more people vaccinated, including shortening the time gap between the first and second dose of Astrazeneca to 8 weeks, half of a previous proposal. The more contagious Delta variant of Covid-19 is now spreading rapidly throughout Thailand and debate exists about the efficacy of vaccines against it.

gordo2613
water, exactly. On another note, in the news today, the Australian govt have said they will be phasing out the Astra Zenica vaccine from Sept, with citizens having either Pfizer or Moderna, Novovax has also been ordered

bushav8r
Sinovac may not work very well with some of the new variants - probably better than no vaccine. Rich people in Thailand will likely not take the chance. Poor people will suffer the consequences.

bushav8r
8 hours ago, Rob2010 said: All seems to be deafeningly silent on the much heralded 'Made in Thailand' Siam BioScience supply of AZ vaccines. Any news there? Better if no news, especially if it is critical.

King Cotton
11 hours ago, Rob2010 said: All seems to be deafeningly silent on the much heralded 'Made in Thailand' Siam BioScience supply of AZ vaccines. Any news there? Confusion and uncertainty reigns re the 'locally made' stuff, with reports, one minute,…

King Cotton
6 hours ago, gordo2613 said: water, exactly. On another note, in the news today, the Australian govt have said they will be phasing out the Astra Zenica vaccine from Sept, with citizens having either Pfizer or Moderna, Novovax has also…