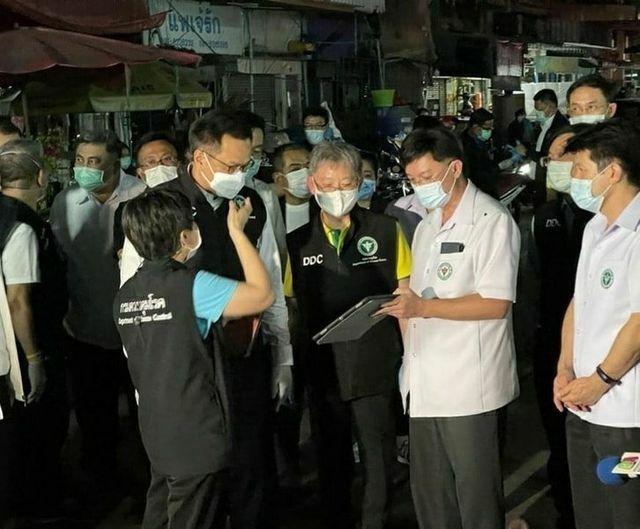 The Samut Sakhon governor Veerasak Vijitsaengsri tested positive for Covid-19 and has been admitted to the hospital for treatment. Prior to testing positive for the virus, the governor had an hour-long meeting on Sunday with public health officials, including Deputy Prime Minister and Public Health Minister Anutin Charnvirakul who is now in quarantine at his home.

The Centre for Covid-19 Situation Administration spokesperson Taweeslip Visanuyothin confirmed the governor’s positive result today. More than 1,000 people in Samut Sakhon have tested positive for Covid-19, Most cases are linked to a seafood market in Mahachai and affecting a large migrant community who work in the fishing hub.

“The official has been working hard in the province and been exposed to a high risk of contracting the disease, despite taking precautions.”

All of the health officials wore masks throughout Sunday’s meeting at the Samut Sakhon Hospital. Anutin says doctors consider him at low risk of catching the virus because he wore a mask.

Following the governor’s positive test result, Anutin had a swab test. He says his first test was negative. Test results from the other senior officials at the meeting are pending.

144 new Covid-19 cases were reported today in the CCSA’s daily briefing. Many of the cases are linked to the outbreaks at a Samut Sakhon seafood market and at a Rayong gambling den. 15 of those cases were detected in quarantine from those arriving in Thailand from overseas.

Thailand’s total number of confirmed cases is raised to 6,285 with 4,180 recoveries. 2,045 people are currently receiving medical treatment for the coronavirus, a record high in active cases in Thailand.

New cases linked to the “Samut Sakhon cluster” include 2 cases in Pathum Thani, 2 in Nonthaburi, 2 in Nakhon Nayok, 17 in Nakhon Pathom, 5 in Samut Prakan, 10 in Bangkok and 1 each in Ratchaburi, Samut Sakhon and Sukhothai.

For cases related to the “Rayong cluster,” 21 new Covid-19 cases were reported in Rayong, 1 in Chon Buri and 1 in Chiang Mai. 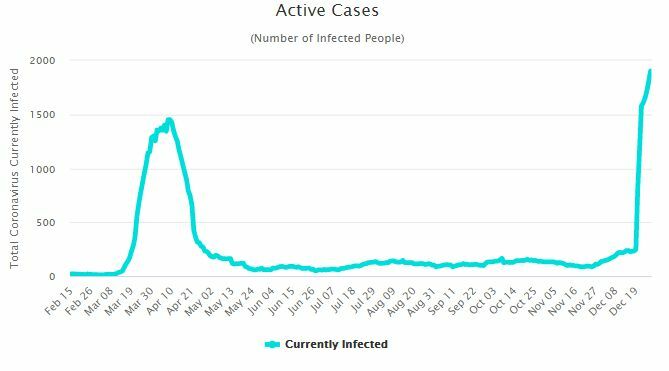 Active Covid-19 cases in Thailand as of December 27, according to Worldometers. 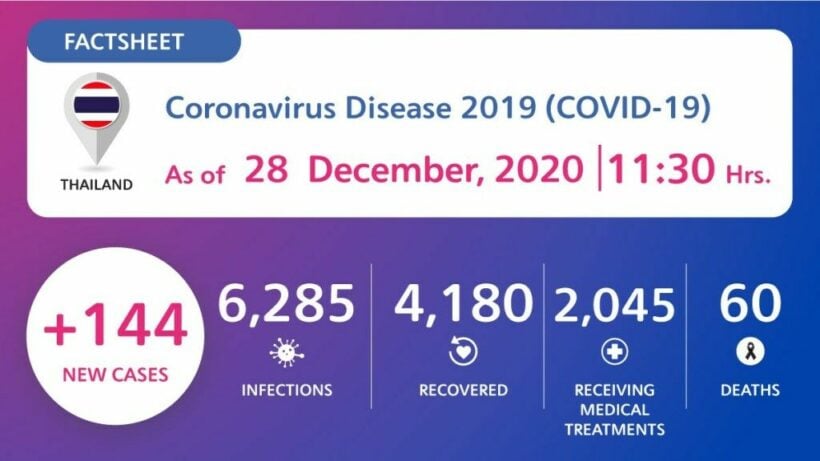 Things are getting back to normal in Phuket. The provincial government eased disease control restrictions, allowing restaurants, bars and entertainment venues to go back to their normal operating hours – no more midnight closure order – and lifting the late-night alcohol ban.

While bars can now stay open late and serve alcohol after midnight, dancing is prohibited and venues cannot serve alcohol in containers that will be shared among groups of people.

The Phuket Communicable Disease Committee agreed to ease the restrictions yesterday and an order allowing late-night hours and alcohol sales was posted today by the Phuket’s Public Relations Department.

“As the Covid-19 situation in Phuket has improved that there are no more Covid-19 infections found, the committee agreed to cancel the late-night alcohol ban in order to revive the economy of Phuket.”

All businesses related to gathering activities are warned to follow the Covid-19 preventive measures.

With the Covid-19 death toll exceeding 100,000 in the United Kingdom, the British government is considering a mandatory hotel quarantine for visitors entering the country. A quarantine system is considered to be an effective way to limit virus transmission and stop new coronavirus variants from spreading into the country.

Britain’s Prime Minister Boris Johnson spoke with senior officials in a meeting yesterday, saying that the government will consider tighter border measures. UK citizens and residents arriving from most of southern Africa and South America, as well as Portugal, will have to quarantine in a hotel for 10 days at their own expense.

Currently, people arriving in the UK from abroad must show the Covid-19 test results, while direct flights from South Africa, Brazil, and Portugal are banned to prevent the spreading of new variants in the Kingdom.

Hotel quarantine measures have been used in Australia, New Zealand, China, India, and Singapore, but the disease control practice has not been widely used in Europe.

In Thailand, those who enter the country from abroad must quarantine for 14 days at either a state quarantine facility or at an alternative quarantine hotel. Travellers must also be tested for Covid-19 before their flight to Thailand and tested at least another 2 times before they are released from quarantine.

819 new Covid-19 cases and 1 new death were reported today in the Centre for Covid-19 Situation Administration’s daily briefing. Thailand has reported a total of 15,465 cases and 76 deaths since the start of the pandemic last year.

There are now 4,335 active Covid-19 cases and many patients are asymptomatic, according to deputy spokesperson for the Ministry of Foreign Affairs Natapanu Nopakun, who also represents the CCSA.

More than 700 of the new 819 cases were detected in active case finding in Samut Sakhon, a Covid-19 hotspot, according to Natapanu. Most of the cases involve migrants, many who work in factories.

Thailand went from less than 200 daily new cases to over 900 new cases, but Natapanu says this is an “expected scenario” due to the accelerated case finding campaign over the next 3 weeks in Samut Sakhon to “break the chain of transmission as soon as possible.”

“Most of these confirmed cases are asymptomatic… Patients do not require the same treatment as those who are symptomatic.”

Those who test positive and are asymptomatic are taken to a state quarantine facility. Natapanu says this keeps the hospitals from becoming overcrowded. 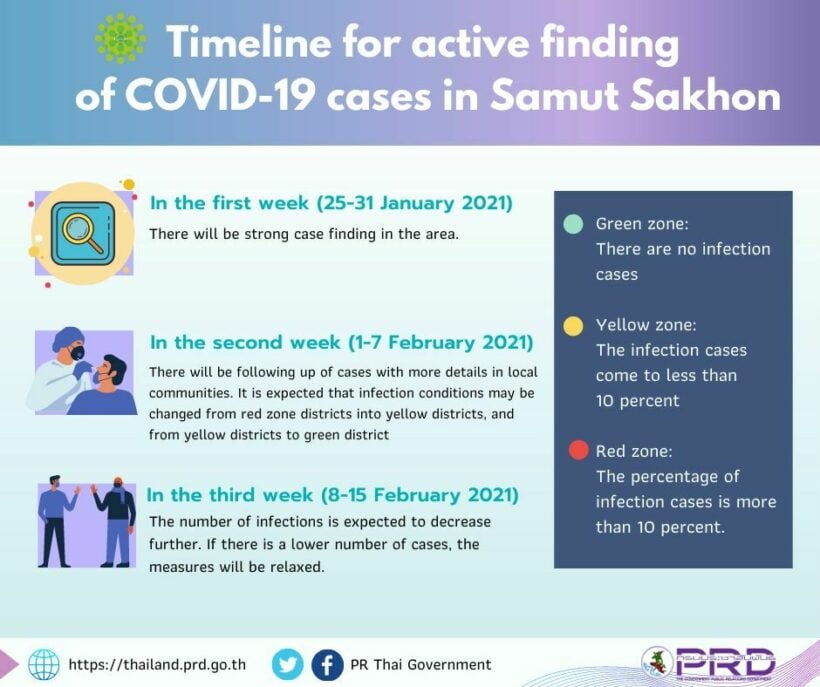 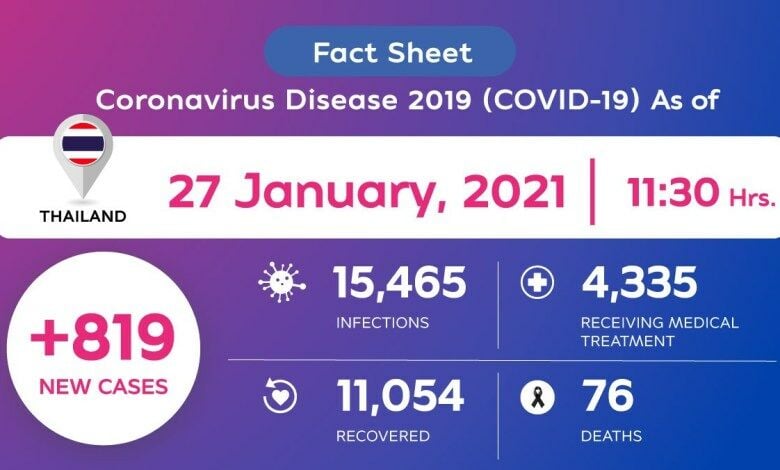