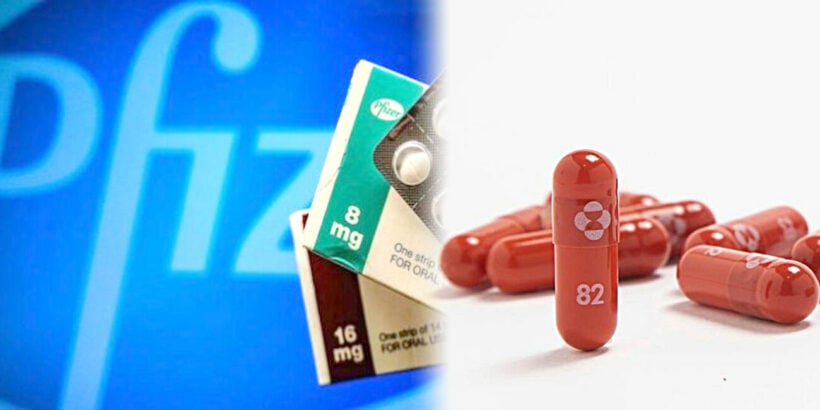 The Ministry of Public Health has been pushed by PM Prayut Chan-o-cha to pre-order Molnupiravir and Paxlovid, the anti-viral drugs that have proven effective in treating Covid-19. The drugs, produced by Merck and Pfizer respectively, have been shown in testing to reduce the severity of Covid-19 symptoms, hospitalisations and death due to the virus.

Molnupiravir recently became the first approved Covid-19 fighting antiviral pill in the world as Britain gave the green light for use, the first country to do so. Pharmaceutical company Merck also announced plans to license out production for generic-drug makers to distribute to poor countries, though Thailand is not eligible and must buy the name brand at full price.

PM Prayut has instructed the Ministry of Public Health to pre-order these Covid-19 treatment pills so that the people of Thailand will have access to them as soon as they are produced and distributed worldwide. Molnupiravir is scheduled for production at the beginning of next year, while Paxlovid is still in the final phases of testing.

The Department of Medical Services had already made an agreement with Pfizer to pre-order Paxlovid two months ago, according to the Department chief, though they’re still waiting for Pfizer to register and get approval with the US Food and Drug Administration.

Molnupiravir and Paxlovid have both been proven to reduce the effects of Covid-19, especially when treated immediately, though they function in different ways. Paxlovid is a “protease inhibitor” that essentially sticks a wrench in the Covid-19 viruses replication process while Molnupiravir interacts with the genetic code of Covid-19 and introduces errors that hinder the effects of the virus.

Meanwhile, PM Prayut has reminded the people of Thailand not to lose vigilance in following social distance and hygiene practices as well as wearing a face mask. The Secretary-General of the Medical Council also called for anyone who has not yet begun the vaccination process to get their first injection as soon as possible, especially those deemed vulnerable due to their age or underlying medical conditions.

Jason
This really was the time to be on the front foot!

Benroon
Here we go more attention grabbing headlines  Actions speak louder than words
LoongFred
13 minutes ago, Jason said: This really was the time to be on the front foot!  Very true. I don't care for him, but this is the right move.

JohninDublin
16 minutes ago, Benroon said: Here we go more attention grabbing headlines  Actions speak louder than words  My thoughts precisely. Now if Anutin does place the order, Prayuth gets the credit. If he doesn't Anutin gets the blame. And that…

ThaiEyes
Having the drug interventions on hand may be a good strategy if they had a strategy for that yet. How to integrate it into the whole covid mess is another thing. Probably more arguing and infighting among agencies, causing more…