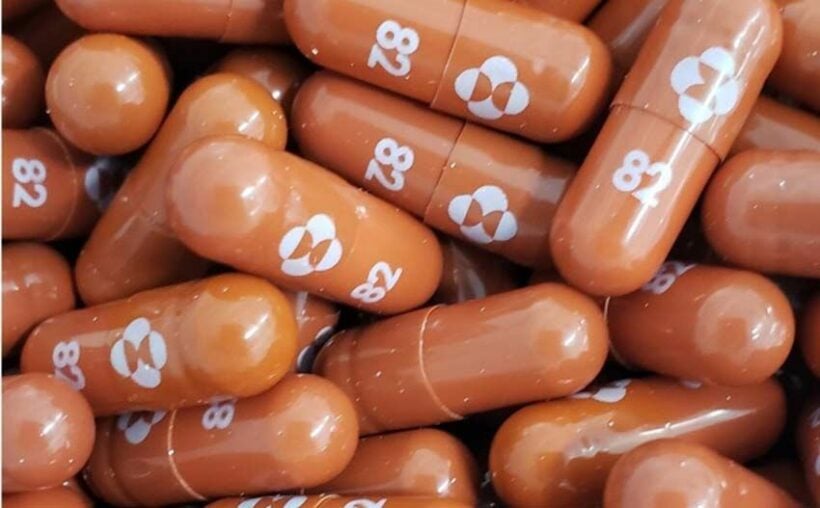 Thailand is joining the queue to get its hands on a new Covid-19 treatment from pharmaceutical giant, Merck. The new treatment, in pill form, has not yet been approved by the US Food and Drug Administration or by Thailand’s equivalent. However, after falling behind other countries in vaccine procurement, officials now seem anxious to get in there quickly, with reports that Thailand plans to purchase 200,000 courses of the new treatment. Media reports say the US government plans to procure 1.7 million treatment courses, at a cost of US$700 each.

Interim trials show that the new drug could reduce the chance of death or hospitalisation with Covid-19 by 50% in those most at risk of severe symptoms. It’s understood that Merck and its partner, Ridgeback Biotherapeutics, plan to apply for FDA emergency use approval as soon as possible. If granted, the pill would become the world’s first oral anti-viral drug for the treatment of Covid-19. Molnupiravir works by creating errors in the genetic code of the virus, thereby reducing viral load in Covid-19 patients and lessening their chances of developing severe symptoms.

Following reports that drugs in the same class have been linked to birth defects in animals, the manufacturer says that similar studies of Molnupiravir, which was given in higher doses and for longer, show that it has no effect on mammalian DNA. Phase 3 trials have shown the treatment to work against all mutations, including the highly-contagious Delta variant, which has been behind most of the recent deaths and hospitalisations around the world.

On the stock exchange, shares in Merck rallied following the news, while shares in Atea Pharmaceuticals, developers of a similar treatment, rose by over 21%. Meanwhile, shares in some vaccine manufacturers fell. It’s understood that both Pfizer and the Swiss healthcare and pharmaceutical giant, Roche, are also working on an anti-viral pill treatment for Covid-19.

Stonker
46 minutes ago, mickkotlarski said: Maybe not Molnupiravir. After all the success rate is only 50% but as research progresses anti viral medications may very well be the answer if a true full proof vaccine for all strains cannot be…

gummy
22 minutes ago, Stonker said: oomegoolie bird Strange you should mention that 😄 The Oomigoolie bird! Rarely seen, but it's plaintive cry is often heard as it struggles to lay it's square eggs:) Here we see it about to land, after…

Rain
1 hour ago, Stonker said: Quite possibly, but the answer could be a vaccine, could be a tablet, could be a nasal spray, or could be being shat on from a great height by the oomegoolie bird. Noone knows, but…
Guevara
8 minutes ago, Rain said: That seems to be the principle key that few are still not picking up on.  NO ONE KNOWS. Most things COVID world are still a mystery......even among the scientific community, though on the surface they'll…
HiuMak
22 hours ago, Thaiger said: Thailand is joining the queue to get its hands on a new Covid-19 treatment from pharmaceutical giant, Merck. The new treatment, in pill form, has not yet been approved by the US Food and Drug…