Today, Thailand is reporting 97 new cases of Covid-19 with 5 cases being imported, raising the total to 28,443 since the pandemic began. This is up from the 69 cases reported yesterday. The government has reported no new deaths, leaving the total at 92 Covid deaths in Thailand. Bangkok logged the most amount of new cases, at 70% of today’s total, or 65 new cases. 44 were found through mass testing and 21 at hospitals. The Department of Disease Control said out of the overall amount reported today, 49 new cases were detected in communities and 43 at hospitals.

Samut Sakhon province recorded 15 new cases, with being 12 confirmed at hospitals and 3 in communities. Samut Prakan recorded 5 new cases, and Nakhon Pathom recorded 3. Pathum Thani, Suphan Buri, Ratchaburi and Chachoengsao provinces each reported 1 new case today. Of the 5 imported cases found today, all were quarantined arrivals from the US, Turkey, Malaysia, and Sweden. 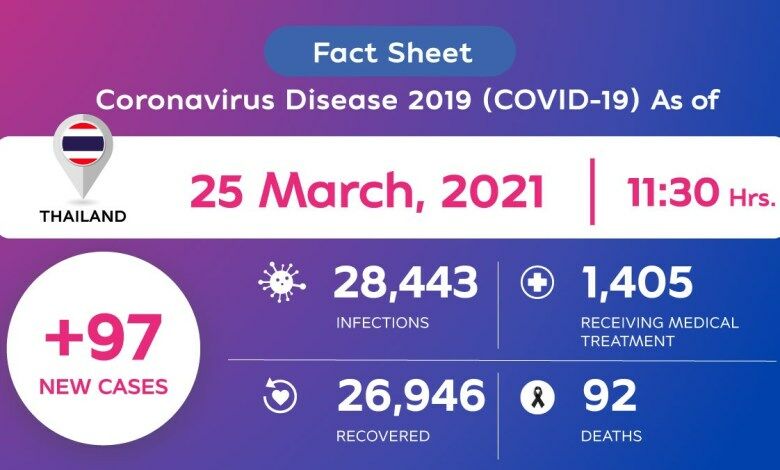 Last Tuesday, Thailand authorities announced that almost 400 allegedly illegal migrants tested positive for Covid-19. The migrants are being housed in Bangkok’s Bang Khen district awaiting to be transferred to a field hospital, with authorities saying the situation is “under control.”

Sompong Chingduang, commissioner of the Immigration Bureau, said 370 men and 23 women had tested positive for the virus in the Immigration Bureau’s detention facility, after being placed in crowded conditions. The facility currently has 490 people detained, in which the number of cases may rise as more people are tested.

Now, the bureau’s detention facilities in Bangkok have stopped accepting new detainees, and instead, sending them to a facility in Nonthaburi province. Those who did not test positive for the virus are either being repatriated or sent to the Ministry of Social Development and Human Security.