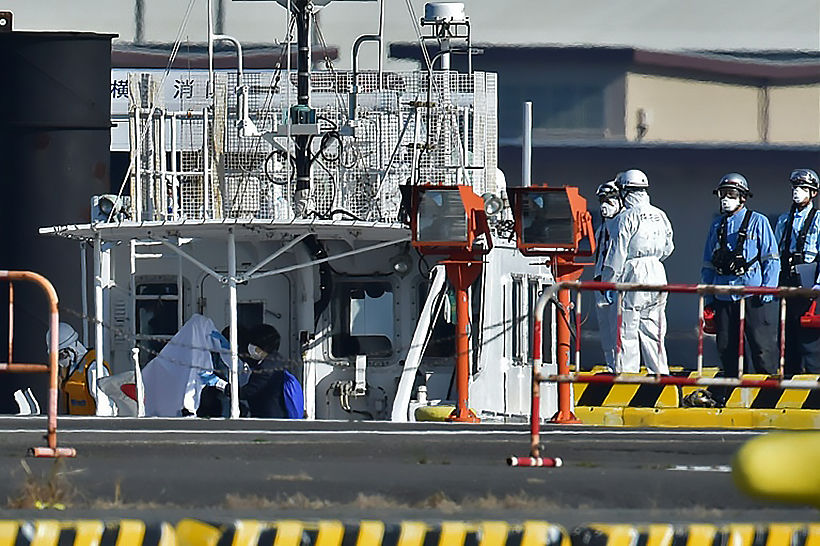 If you’ve got to be quarantined, it may as well be on a luxury cruise ship. But Japan’s health minister Katsunobu Kato announced today that 10 people on the Diamond Princess, the cruise ship quarantined in Yokohama Harbour, have tested positive for the Novel Coronavirus. The 3711 guests and crew are still being tested, after a former passenger, who disembarked in Hong Kong on January 25, was diagnosed with the illness.

The minister told journalists that specimens have been collected from more than 200 people on the ship.

“So far, the results of 31 tests are available, with 10 people on board confirmed to have the virus. From around 7:30am we had them get off the vessel, and with cooperation with the coastguard we are sending them to medical organisations.”

The remainder of the passengers and crew will be required to stay on the vessel for 14 days. Medical consensus indicates the virus has an incubation period of up to two weeks.

The virus has killed nearly 500 people and infected more than 24,000 in mainland China. More than 20 countries have confirmed cases, including Thailand, Japan and the United States. The World Health Organization (WHO) has declared a global health emergency, numerous governments have imposed travel restrictions, and airlines have suspended flights to and from China.

Around 20 cases have been confirmed in Japan, not including the cruise ship infections, but including citizens returning from the Chinese city of Wuhan, the origin of the outbreak.

There have also been several cases of apparent person-to-person contagion in Japan, including a tour guide and bus driver who contracted the virus after coming into contact with visitors from Wuhan. Neither had visited China in recent months.

Japan, like New Zealand, Australia and a growing number of countries, has implemented new rules enabling it to deny entry to those who have recently travelled to Wuhan, or those with Chinese passports issued there. It has evacuated more than 500 Japanese nationals from the city, and attracted some criticism for its relatively loose quarantine approach.

Returnees were asked to voluntarily submit to testing requested to “self-quarantine,” rather than be forcibly isolated as other countries have done with their citizens.

Japanese officials say the current designation of the virus doesn’t allow for either forcible quarantine or mandatory testing for those suspected to have it.

Four evacuees from Wuhan kept in naval hospital for observation