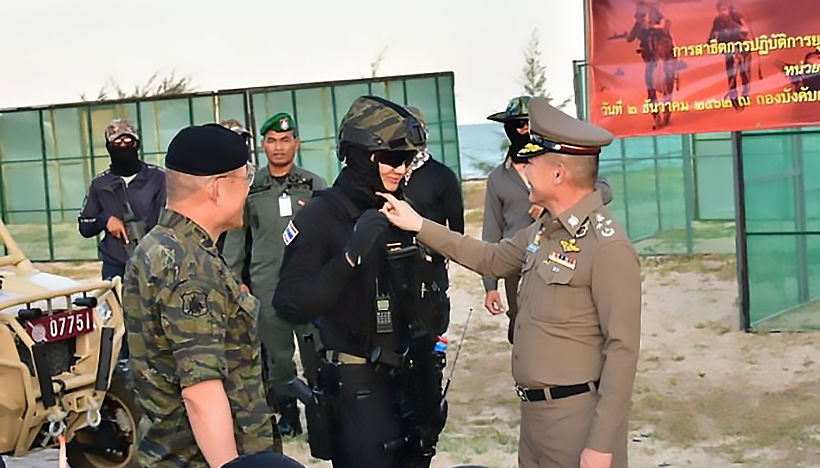 Deputy PM Prawit Wongsuwan said yesterday that there is nothing illegal about the police commissioner promoting his own son to a senior police rank despite not meeting all of the criteria.

The Royal Thai Police Office insists that Chanant Chaijinda was promoted on merit, and not because he’s the son of national police chief Chakthip Chaijinda. The RTPO was responding to news reports questioning the double promotion of Chanant from sub-inspector to full inspector and his rank to police major.

Prawit says there are grounds for exception. Chanan was recently promoted to become a commander in a Border Police unit, despite serving just three years as a deputy inspector, far less than the the required seven.

“They can do that, it’s supported by regulations.”

Police officials say Chanan was exempted from the requirement because he received overseas training and has exceptional knowledge that will benefit the force. When a reporter asked whether it’s appropriate for a police commissioner to approve fast-tracking his own son, Prawit snapped “Do you love your son, too? Do you?”

Recent reports say some police officers were angered by the April 2019 order that promoted Chanan to the rank of a commander in the Border Police’s air support unit. The news ignited complaints of nepotism and privileged treatment among the police force.

At a press conference yesterday, police spokesman Krissana Pattanacharoen rejected the accusation and said police have the authority to promote individuals who show talent and valuable knowledge.

Krissana said Chanan qualified for the exemption because he underwent anti-terrorism and parachuting courses, completed a sniper course in Israel, and received training from the FBI in the United States. He questioned why the issue only surfaced now, nearly a year after the promotion was approved.

“Speaking frankly, the commissioner could have appointed him to any position if he really did whatever he wants, as the media allege. He could have sent him somewhere comfortable. But why is no one asking why Chanan was sent to the Border Police?”