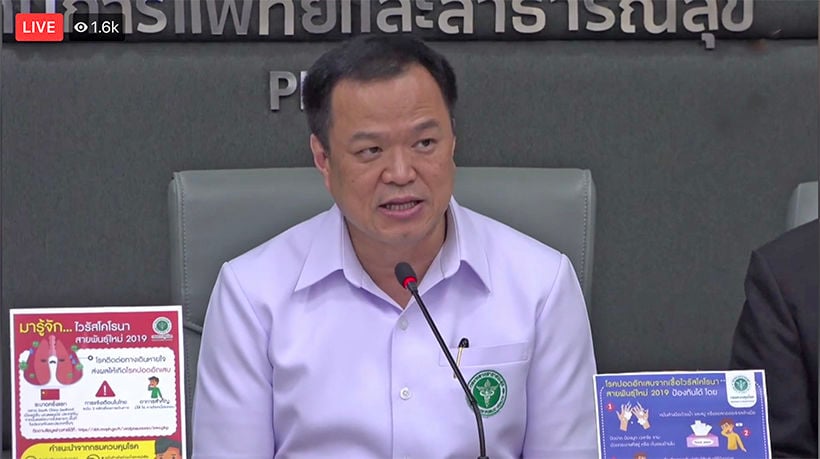 Four* of the 138 Thai evacuees from the Chinese city of Wuhan, the epicentre of the Novel Coronavirus outbreak, were taken to the hospital at the Royal Thai Navy’s Sattahip Naval Base for observation yesterday, after they were found to have  a fever.

Public Health Minister Anutin Charnvirakul, who was at Pattaya’s U-Tapao Airport last night to meet the evacuees, says doctors suspect the fever might simply be caused by anxiety, fatigue and dehydration.

He says that if tests results, expected today, are negative for the virus, they’ll be allowed to join the others at special lodgings at the naval base.

The minister added that all the returnees are in high spirits and will be kept under observation by a medical team for a 14-day quarantine period.

The director-general of the Department of Disease Control explained that evacuees were given only a single bottle of drinking water and a box of sandwiches during the flight from Wuhan, so stress, anxiety and thirst might have caused elevated body temperatures.

He says doctors will assess the condition of 138 returnees every 12 hours, adding that psychiatrists are on duty to provide them with counselling. Video allow the returnees to communicate with their families.

The flight crew and 15 medics who went to Wuhan to receive the evacuees also underwent physical checks to ensure they did not exhibit symptoms, and were sprayed with disinfectant before they were allowed to leave.

*A report from Reuters yesterday put the number of hospitalised evacuees at six.