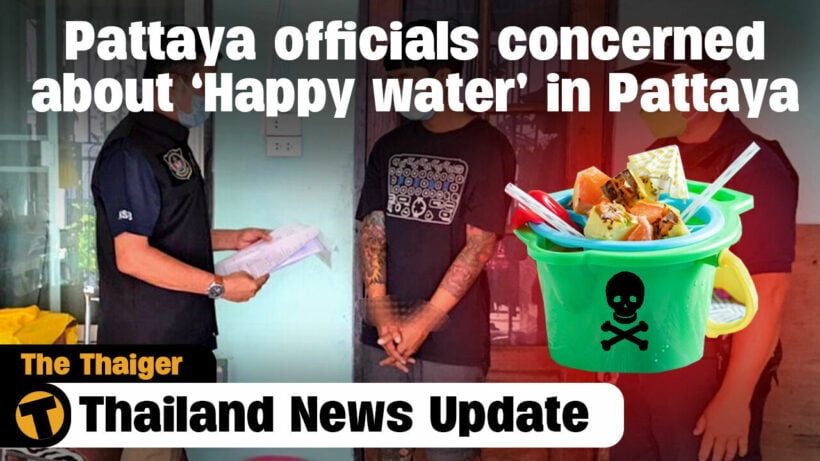 After Pattaya police busted over 20 teenagers using a’ drink called happy water’ at a party last month, there’s now an increased effort to crack down on the illicit drug cocktail. The chief of the Narcotics Suppression Bureau says happy water is usually made by combining ecstasy, methamphetamine, diazepam, caffeine and painkillers, mixed into a curious liquid cocktail with hot water and mixing it with sweetened drinks. ‘Happy water’ reportedly makes people feel euphoric but is a completely uncontrolled and potentially dangerous concoction. The consumers are totally unaware of the actual ingredients.NSB officers have been on the hunt for 2 Thais and 1 foreigner thought to be selling or trafficking the brew at entertainment venues in Pattaya. They have so far arrested 1 Thai man yesterday, a 28 year old for allegedly colluding in trafficking illicit drugs.

A massive on-board fire has destroyed and sunk a yacht at the Yacht Haven Marina in Phuket’s north over the weekend. Officials who inspected the 12 metre catamaran believe the fire may have been caused by an electrical short-circuit, however a further investigation is still underway. No passengers were on the vessel when it caught fire. The yacht, a luxury catamaran, was known as the ‘Jimmy Blue’, and was tied up at the marina dock when the fire occurred. The vessel had been permitted to sail along the Andaman coast between Ranong and Satun after receiving its boat licence 8 years ago.

Former deputy PM and finance tzar, 68 year old Somkid Jatusripitak has accepted an invitation to serve as a prime ministerial candidate of the newly established สร้างอนาคต Thai Party which stands for Building Thailand’s Future. Mr Somkid said he was willing to be the candidate, after he was APPROACHED for the role. He’s been in Thai politics since 2004, and served under 2 PMs as Finance Minister and a deputy PM. In other future PM speculation, Paetongtarn Shinawatra, Pheu Thai Party’s head of marketing, and former PM Thaksin Shinawatra youngest daughter, is saying little about her chances of standing as the main opposition party’s prime ministerial candidate. She was speaking at a seminar over the weekend but refused to throw her hat into the ring although she is a hot tip when the party declares its candidate after the Lower House is dissolved.

Ten people have now been confirmed dead after a Japanese tour boat with 26 people on board went missing on Saturday. The victims included seven men and three women. The 26 people on board included 24 tourists, the captain, and a crew member. The boat, Kazu 1, was on a sightseeing tour around Japan’s northernmost main island of Hokkaido when it started taking water. Local media reported waves in the area were up to three meters high when the boat issued its distress call.

A car bomb and a gun fight has caused havoc in the Myawaddy Township in Myanmar last night. The car bomb, SUSPECTED to have been left in a pickup truck, EXPLODED at an immigration building near the border with Tak province in Thailand. The remains of the pickup truck suspected of carrying the bomb were found near a checkpoint. After the bomb went off, armed anti-government rebels arrived at the building and fought a 15 minute gun battle with the Burmese troops guarding the building and border checkpoint.

More than a dozen buildings in Beijing’s largest district head into lockdown, after the Chinese capital reported a mere 22 new cases on Saturday. The district of Chaoyang, with some 3.6 million people, will also require everyone living or working in the area to undergo three Covid-19 tests this week. Meanwhile, local authorities in Shanghai have fenced off apartment building entrances to restrict movement around the city while censors keep struggling to remove a viral video showing the hardships of residents stuck in the tough lockdown of China’s largest city. Chinese president Xi Jinping says he’s determined to stamp out the highly infectious Omicron coronavirus variant, bringing dozens of cities to a standstill and paralysing the economy.

And lastly, Strife continues in Sri Lanka as thousands of Sri Lankan university students mobbed the PMs home yesterday demanding his resignation over the ‘island nation’s worsening economic crisis’. Months of lengthy blackouts, record inflation and acute food and fuel shortages are sparked increasing public disconTENT in Sri Lanka, which is dealing with its worst economic downturn since independence in 1948.