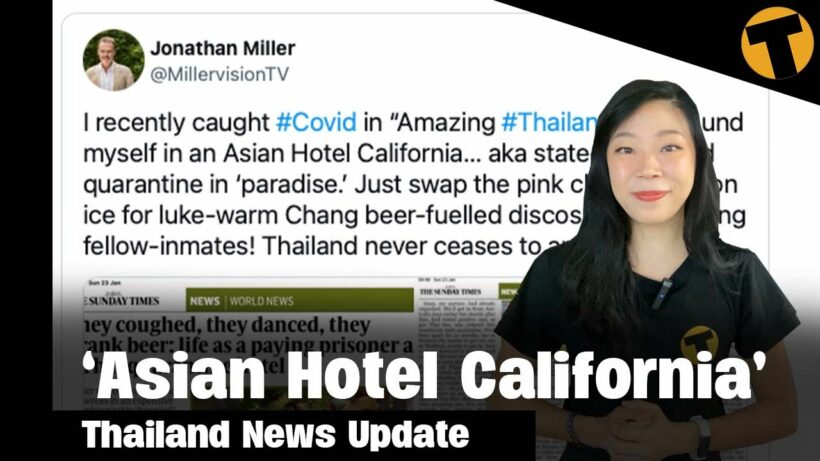 Following British journalist Jonathan Miller’s harsh and lengthy report of his stay at a Phuket quarantine hotel, the Phuket Governor is calling for an investigation into the reporter’s claims. The reporter documented the impromptu parties with Covid-infected travellers during his two-week stay at a Phuket “hospitel”.

In the Sunday Times, Miller, who was classified as high risk of contracting Covid-19, was ordered into a quarantine hotel with his partner, who had tested positive for the virus. He says it was “Asian Hotel California” with “late-night discos fuelled by local beer”.

Now island officials are launching a full PR campaign to negate the tarnished reputation of their Sandbox program and the quality of their hospitels, which are hotels that partner with hospitals to over basic care for Covid-19 patients with mild symptoms.The Governor was then joined by leading island tourism and health officials in a televised media conference, saying that the negative news created a crisis that they aim to use as an opportunity to make improvements and correct problems.

Miller’s biting hotel report came just days before the Test & Go program is relaunched on February 1 which aims to welcome back international tourists with revised restrictions and conditions.

Regardless of whether the World Health Organisation agrees or not, Thailand health officials have decided to declare Covid-19 as an endemic disease by the end of this year according to the Ministry of Public Health.

A meeting of the National Communicable Disease Committee staked their claim yesterday, in defiance of the WHO definition of when Covid will become ‘endemic’.Thailand will create its own academically acceptable criteria for measuring whether Covid-19 is a pandemic or endemic, according to the Health Permanent Secretary after the meeting.

The decision would be made based on 3 criteria that Thailand is already very near to being met.First, 80% of at-risk people must have received at least two doses of a Covid-19 vaccine. Second, the daily Covid-19 infection rate must be under 10,000 cases per day, a figure that Thailand hasn’t surpassed since October 18 last year. And finally, the death rate must not exceed 0.1%, about a ninth of where it hovers now at around 0.92%.

The Permanent Secretary explained that as the death rates fall and the infections are less severe, and as people are fully vaccinated, Covid-19 may ebb and surge, but the primary danger is past.

In the Northeastern province of Yasothon, police have arrested 3 men on several charges relating to selling a 16 year old girl for sex. Police tracked the 3 men down as part of a larger investigation from a previous suspect they had arrested on similar charges for underage prostitution, involving another girl, also aged 16.

The 3 men, aged 27, 32, and 33, were taken into custody by officers from the Anti-Trafficking in Persons Division. Two of the men are accused of recruiting the girl through her Twitter account and coercing her into meeting older men for sex.

A draft amendment aiming to increase fines for traffic offences is expected to pass the Senate at the end of this month and come into force in July.Nikorn Chamnong, deputy chairman of the House panel, said the proposed amendment to the Land Transport Act has been approved and pending deliberation by the Senate.

Under the bill, the fine for traffic offences such as failing to comply with traffic signs will be increased four-fold from 1,000 baht to 4,000 baht. The House committee has been working on road safety rules, especially speeding, and is pushing for stricter regulations for riders of big bikes who must have a special licence to curb accidents involving such vehicles.

The majority of traffic deaths in Thailand involve motorbikes.

African Swine Fever is spreading across Thailand. The country’s agriculture minister reports that the disease has infected pig farms and one slaughterhouse in 13 Thai provinces, mostly in Central, Northeastern, and Southern Thailand.

The infected farms and the five-kilometre radius around them are now declared epidemic zones. Instead of giving the ministry’s 2.9 billion baht emergency budget to pig farmers as he originally planned, the minister will now spend the money trying to contain the virus, which is not a threat to humans.

But a Move Forward Party member says the swine fever is more widespread than the Livestock Development Department reports. The MP made the claim after talking to a livestock official in Nakhon Pathom. The livestock official said tests for the fever might not always find the disease because pigs infected with it often die shortly after they’re infected.In the meantime, expect your pork prices to stay high.

In one of the strongest signals Singapore is reopening, the Singapore Tourism Board has announced a new seven-year deal to continue hosting the Formula One race in the island nation.The agreement is the longest renewal with the Formula One Group, and will be used to help promote Singapore as a business and lifestyle destination.

The last two night races were cancelled during the Covid pandemic…. this year’s F1 race is scheduled for October 2 at the Marina Bay Street Circuit.

As the Omicron wave moves across Asia, Tokyo yesterday reported 16,538 new Covid infections, rewriting its record for the third straight day as the surge shows no sign of slowing.

Nationwide, the daily count hit nearly 79,000 cases, topping 70,000 for the second day in a row.The occupancy rate of Covid hospital beds in Tokyo has now reached 44%, a 300% increase in just a week.