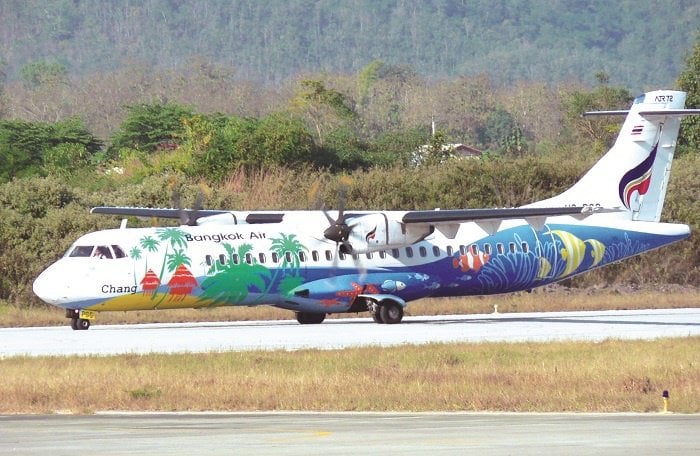 Tasara Taksinapan, the carrier’s media relations manager, recently confirmed the new route with the Gazette’s ‘Up in the Air’, but said that the carrier had yet to issue an official press statement about the service, which will start on October 25.

The flights, which will take to the skies on Monday, Wednesday, Friday and Saturday mornings, will be aboard a 70-seat ATR turboprop. They will depart from Phuket at 7:30am and land in Hat Yai at 8:30. The return leg departs HDY at 9:10am with scheduled arrival at HKT at 10:15.

One-way fares for the flights are 1,890 baht, all inclusive, Mr Tasara confirmed.

“We believe there is very high potential and demand for these flights and we really want to further penetrate the southern market,” Mr Tasara said.

Driving from Phuket to Hat Yai takes a minimum of six hours, even under ideal driving conditions, he noted.

With the lack of flights, so-called VIP bus services linking the two cities are the transport mode of choice for many commuters, at a one-way cost of about 1,000 baht.

While there has been vast expansion in aviation routes in the region in recent years, the lack of flights linking southern Thailand’s two busiest international airports has been a major ‘missing link’.

Currently, businessmen and others wanting to fly between the two commercial centers have to fly all the way north to Bangkok, then catch another connecting flight due south.

The last airline to try connecting Phuket with Hat Yai was Phuket-based Happy Air, which in late 2009 connected the airports with a ‘triangle route’ that also served Langkawi Island in Malaysia.

The now-defunct airline used a 34-seat, twin-engine turboprop SAAB 340 A. However, Happy Air quietly dropped the flight, citing insufficient load factor, and then tried a number of other niche routes out of Suvarnabhumi Airport in Bangkok before finally shutting down earlier this year.

Before that, Nok Air tried the route for a period in 2007, but quietly terminated the service in mid-November that year, citing insufficient passenger numbers aboard its 150-seat Boeing 737-400 jet aircraft.

At the time of cancellation, a Nok Air spokesperson said that an airplane of about 70 seats was suitable for the route, but that Nok Air had no plans to buy smaller aircraft to service it.

The last airline to run the route successfully was Phuket Airways, which ceased scheduled operations in 2007 following a series of widely-reported safety incidents on long-haul flights to Europe that ultimately led to its banning by the European Union.

Phuket Air ran the HKT–HDY flight with high load factors for many years, and even weathered the post-tsunami tourism downturn in 2004. But its problems in Europe, as well as increased security concerns following the fatal April 3, 2005 bombing of Hat Yai Airport by Pattani-based separatists led them to focus on a on ‘wet lease-ACMI’ structure.