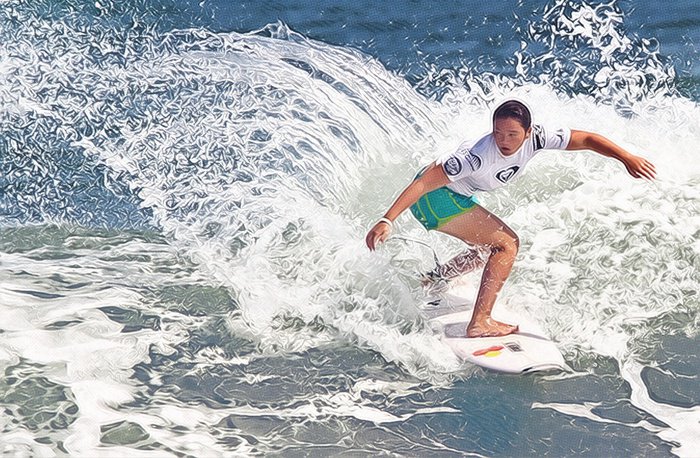 Now she is competing in the top regional competitions, most recently at the Quiksilver Challenge, which took place in June at Canggu in Bali.

“I placed sixth at Canggu,” she says with a shrug. “The competition has really grown and there are a lot of young girls who are home-schooled and live on the beaches in Bali. Their fathers are all ex-pro surfers and board shapers, so it’s really hard to beat them.

“When the competitions are here in Phuket, I’m still pretty hard to beat because I have all the home advantage.”

Anni is also one of the top flow-boarders in the region and spends her out-of-school days training and working part-time as an instructor at Kata’s Surfhouse.

“I’ve won pretty much all the recent flow-boarding competitions. Ili Lim from Singapore won the world title in Abu Dhabi last year and I beat her at the Asian series, but I couldn’t go to the world finals because of school.”

Despite the call of the surf, Anni is trying hard to keep on top of her school work.

“I’m finishing my final year of school and thinking about what to do after that. My mum wants me to go to university, so I have to keep my grades up.

“Sometimes it’s hard to find a balance because when the surf is up, you want to surf, or have to surf, and the teachers don’t really get that.”

Anni also has to contend with a busy competition schedule, with surf contests looming in the Maldives, India and Indonesia, all before the end of September.

“We’re looking for more sponsorship so I can get to the Maldives. They have really great waves on the outer fringes of the reefs, but we would need to rent a boat to stay on, so it’s paeng mak [very expensive].”

Roxy Thailand and Surfhouse are both supporting Anni’s roll to boarding stardom, but the cost of competing around the region can make being a surf star an expensive undertaking.

The Flowtour Asia, for instance, will see competitions in the Philippines, Singapore, Hua Hin and Bangkok over the next few months. That’s a lot of air miles.

“I’ll try to get to one or two of those so I can get into the finals because I think the winner gets to go to the United States or Korea this year.”

When the surf is up in Phuket, however, you’ll find Anni atop the waves at Kata or Kalim.

“I used to like surfing every day after school in the low season. But now I only want to surf if the waves are good.

“The best thing is not thinking about anything else, just being in the water and feeling the waves come past. And when I take off on a good one, it’s incredible. I love it.”

Books: Get lost in an epic Jamaican novel