By Bill Barnett of c9Hotelworks.com

For 2017 the island’s gateway airport posted 11.3% year-on-year growth to reach an estimated 8.4 million incoming passengers.  This was mainly driven by a 20% surge in Mainland Chinese travelers to the island and a rising number visitors during low season of 11.2% compared to the same period in 2016. 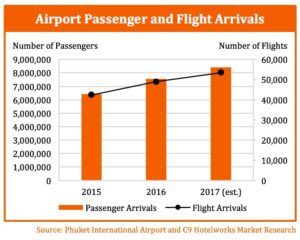 Hotel performance continued to see an uptick in occupancy at 77% last year based on data from STR, though there is a slight downward trend with a median room rate of 3,740 baht per room/per night.

Data in C9’s report reveals there was an average of 641,863 passenger arrivals per month in 2017 during low season compared to 759,703 in the high season. This is a significantly smaller gap than in previous years. The statistics demonstrate how Phuket is evolving into a year-round destination. 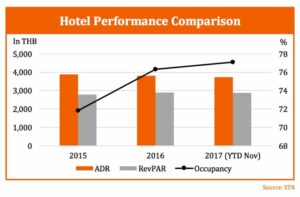 Another key trend is market-wide occupancy demonstrated by 54% of Chinese and 55% of Australians choosing to visit Phuket during the May – October low and shoulder seasons.

Analysing the market C9’s Managing Director Bill Barnett is quick to point out that island hoteliers need to be pragmatic about the impact in shifting geographic segments.

“Phuket International Airport is the de facto entry point for tourists to Khao Lak which has nearly 9,000 hotel keys in its inventory.  Lower priced accommodation and a large selection of beach front properties are benefitting from increasing Australian and Chinese numbers in July and August.”

Two other key points from the report are that while arrival growth is prevailing, the average length of stay is shrinking due to increased regional Asian demographic shift. (eg. Chinese visitors tend to come for days rather than weeks). And secondly, the exponential growth of offerings such as Airbnb are becoming mainstream competitors to hotels. 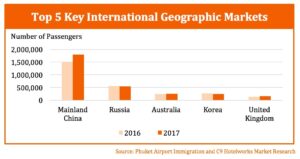 Soaring tourism numbers are not only driving hotel development but peripheral sectors such as attractions as well.

With its successful water park in Hua Hin, Proud Real Estate plans to start the development of Vana Nava Phuket by late 2018.

Coupled with a 255-room Holiday Inn Express, the project is valued at nearly 3 billion baht.  Kata Water Park is another notable project that will begin construction in 2018.  Developed by Kata Group on a 13-rai plot, replacing Kata Plaza, the plan includes a 300-room hotel and multiple dining outlets. 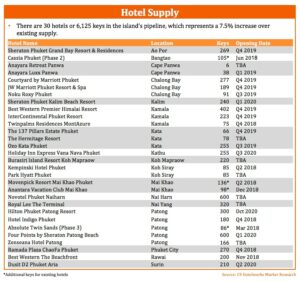 Summing up Phuket’s continued growth trajectory Bill Barnett of C9 Hotelworks says “…while the recent upgrading of Phuket International Airport and new terminal has been a welcome change, the long-term reality is it’s just a band aid to a macro issue.  As Khao Lak continues growing along with the beach areas north of Phuket, the need to diversify Phang Nga’s rising tourism market with its own airport is becoming more and more urgent by the day.”