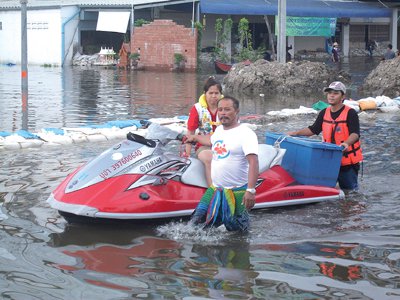 PHUKET: In a humanitarian effort, 13 members of the Patong Jet Ski Club traveled from Phuket to the flooded regions in and near Bangkok where they used jet-skis to rescue more than 600 people and distribute emergency food rations to stranded victims who were unwilling to leave their homes.

Somkid Kueanun, a 36-year-old Phuket native and head of both the Patong Jet Ski Club and Patong Life Guard Group, accepted the invitation from the Department of Disaster Prevention and Mitigation to help the flood victims. They ran a rescue operation from October 17 to October 23.

“I received an invitation from the Department of Disaster Prevention and Mitigation to bring my jet skis to help flood victims in the central part of Thailand. They had offered to transport the club’s jet- skis to Bangkok for us and cover all expenses for the mission,” Somkid said.

Somkid then asked all of the jet ski operators in his jet-ski club to see if anyone was willing to help. They did not hesitate to volunteer. “In 2004, when the tidal wave hit Phuket and other provinces in the south, we received so much help from everyone. I thought it was time for us to repay their generosity,” he added.

The Department of Disaster Prevention and Mitigation provided them with a ten-wheeler truck to transport their jet-skis. They drove three of their own trucks there as well.

“We left Phuket on October 17 and arrived at the flood relief center at Don Muang Airport on October 18. When we arrived, there was chaos. We wasted a whole day trying to figure out who to contact. Finally, the Mirror Foundation told us where we could start our rescue mission,” Mr Somkid remarked.

Mr Somporn Khanpakdee, a 34-year-old man from Phang Nga, is one of the members of the jet-ski club who went to Bangkok.

“Our mission started at the Navanakorn community in Prathumthani province. Our main goal was to relocate the flood victims to a safer place. When we first arrived, the water was already up to our waists. When we were done for the day, around 8pm, the flood water was around 2 meters deep. In that one day we rescued about 600 people from the area,” affirmed Mr Somporn.

There were a few obstacles, but the mission was a success. The main problem was that debris in the water was constantly getting caught in the jet-ski propellers. They had to jump off the jet skis and dive into the water in order to clear the propellers. “I can’t tell you how disgusting the water was,” he added.

On subsequent days of the mission, the team transported the sick and elderly to safety, and distributed food rations to those who were unwilling to leave their homes.

“We went to Wang Noi and Bang Pa In in Ayutthaya, and Bang Bua Thong in Nonthaburi on the following days. We went there to rescue people from their homes and to provide them with food rations,” said Somporn.

Unfortunately, there were a few profiteers who threatened violence against the team for relocating victims without charging them a fee. “The biggest problem we faced was some local long-tail boat operators who were charging people for transporting them to safety. They got upset with us and threatened us with a gun because we were helping people for free. They felt that we were stealing their customers,” he disclosed.

“We are done with our mission, but there’s still a lot we could do. We returned to Phuket on October 22, but we all felt we should have stayed longer. If anyone could provide us with a ten-wheeler truck to carry our jet skis back to Bangkok, we would gladly return there,” announced Mr Somkid.

When asked if they were motivated to help the flood victims in order to improve the image of jet-ski operators in Phuket, he quickly responded: “We don’t care about our image. We didn’t do this to change anyone’s attitude toward us. We just wanted to offer help to those in need. After all, we’re all Thai, and no one should be left on their own in such a difficult situation.”

Hats on for charity at Phuket’s Andara Resort

Phuket Books – A mission of madness