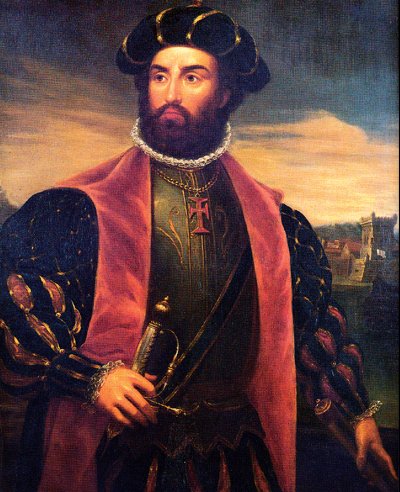 PHUKET: Every grade school student is familiar with the epic voyage (1497-1499) of Vasco da Gama from Portugal around the Horn of Africa to India.

What they are not so familiar with is the gruesome tale of naval bombardments, sea battles, siege, sack, piracy and mass mutilations that would follow. Launched only five years after the first voyage of Columbus to the New World, da Gama’s arrival in India was the tipping point in the Christian West’s struggle against the Muslim East. And Iberia was the natural launching pad, its rulers having only recently expelled the Moors. Worldly Venice might trade in Egypt for Asian spices, but crusading Iberia meant to snatch that trade away from the Muslims.

This is a story told with great flair and serious scholarship by Nigel Cliff in his Holy War (HarperCollins, New York, 2011, 547pp), subtitled ‘How Vasco da Gama’s Epic Voyages Turned the Tide in a Centuries-old Clash of Civilizations’.

As the title implies, the author must dutifully trot the reader through a canned history of the land and sea battles of the Mediterranean, the rise of Islam and the Crusades. But once da Gama takes off on his three small ships in 1497 bound for India, the story picks up pace, suddenly awash with the color, splendor and danger of unknown lands and peoples.

“They were not just traveling for the pleasures of discovery or the profits of trade; they were sailing to convert and conquer in the name of Christ, the author observes. “Religious passion joined to the opportunity for epic plunder was a lethally galvanizing combination, and it would draw the Portuguese inexorably on to India and beyond.”

It was no accident that the Portuguese sails were emblazoned with red crusader crosses. They were part of the same strategy that sought to expel the Muslims from Europe, North Africa and, eventually, Jerusalem.

As Portuguese ships slowly picked their way over decades down the west coast of Africa, the Arabs were already long established along the east coast, operating a string of trading towns for gold, ivory and slaves. The reception that da Gama met in these far-flung outposts varied, but his country’s long-term intentions did not: the Portuguese aimed to oust the Muslims and establish a string of fortified trading posts along the coasts of Africa, India and the Far East.

At first, they were woefully unprepared for the task. After incredible hardships, Vasco da Gama’s bedraggled little fleet reached the fabulously wealthy Calicut on the west coast of India, only to find the ruler, his nobles and the leading Muslim merchants turning up their noses and laughing out loud at the pitiful trade goods they put on display. What use had they for woolen cloth, red caps and tiny brass bells?

The Portuguese did have one technological advantage: naval artillery. When Da Gama returned on his second voyage, his nineteen ships laid waste to the Indian coast. They had no qualms about burning and sinking the Miri, a huge merchant vessel packed with men, women and children returning from the haj to Mecca.

“The dehumanizing notion that their enemies in faith were somehow not real people was too deeply ingrained to the shaken,” Cliff writes. “Like holy warriors before, they avoided looking into the whites of their victims’ eyes and got on with their godly business.” Later admirals seized Hormuz and Aden and bottled up the Arabian Gulf and the Red Sea. The Arab spice trade dwindled to nothing as the Portuguese advanced further east taking Malacca, the Spice Islands and Macau.

In the process, they lost their crusading fervor to advance on Jerusalem and settled down to enjoy their loot. It took a century before the superior warships of the Dutch and the English picked off their coastal prizes that stretched from Hormuz to Goa to Malacca. At its conclusion, the glorious Portuguese Age of Discovery is revealed as a squalid tale of greed, violence and treachery, all in the service of the Portuguese king’s mad idea of weakening the Arab world to the point where Jerusalem could be surrounded and captured in the name of Christ.

Millions of Asians and Africans paid dearly for that vision. “The clash between East and West has consistently been as creative as it has been destructive,” Cliff concludes. “The one thing it has never been is stilled, and dogmatists and diehards of all stripes have soon enough found themselves left behind.

“In the end, the religious certainty that drove Vasco da Gama and his fellow explorers halfway around the world was also their undoing. For all their astonishing achievements, the idea of a Last Crusade, a holy war to end all wars, was always a crazy dream.”