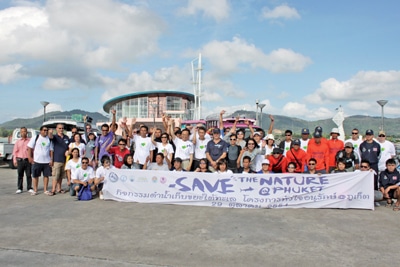 PHUKET: The sandy seafloor suddenly gave way to the wall of wrecked coral skirting Coral Island. The forest of dead branching corals, which should have been a Mecca of sea life, was a ghost town. The site was haunting, but further along the reef, the barren coral landscape gave way to signs of life as a volunteer dive team carefully picked fishing nets from a coral branches.

Sights like this are becoming more common in Thailand’s waters. In fact, the coral reefs of Thailand and the rest of the Indian and Pacific Ocean area are declining at a rate of nearly 1,553 square kilometers a year, twice the rate at which the rainforest is disappearing.

On October 29th the Thailand Diving Association (TDA) dug in to make a difference at Coral Island with their annual coral reef cleanup dive, which is part of “Save the Nature @ Phuket”, a marine awareness program run by the Tourism Authority of Thailand, the Phuket Marine Biological Center and the TDA.

The TDA and its volunteers collected rubbish around Coral Island and did their best to raise awareness of the ecological and economic importance of the reefs around Phuket.

Ninety volunteer divers, aware of the importance of coral reefs, boarded two different boats on Saturday, one provided by All4Diving company and the other from Dive Master Co Ltd.

Though only 95.22 kilograms of rubbish were collected during the dive, the TDA saw this as a positive sign for the area.

For Thailand Diving Association representative Varaporn Jittamonta the relatively small amount of trash collected [compared to previous dives] wasn’t a story of failure, but a story of promise.

“It was a very successful day. There wasn’t a lot of garbage collected, but that’s because local people have become more aware of the importance of conserving our natural marine areas,” she said.

“This year was different, because there were more Thai divers helping out; last year it was all foreigners,” she added.

Mrs Varaporn believes that the improvement is a result of educational programs, such as “Save the Nature @ Phuket”, which focus on creating awareness of the importance of nature conservation, with the hope of eventually restoring the marine systems around Phuket to a healthy state.

“Tourism in Phuket is about our natural resources. If we destroy them, we destroy our source of income,” she said.

Claude de Crissey, owner of All 4 Diving, was glad to be a part of the coral reef cleanup again. Claude is also planning to participate in the Patong Beach cleanup organized by the Thailand Diving Association and Patong Municipality, scheduled for December 16.

All 4 Diving Tour Director David McGuire was also pleased with the outcome of the event.

“We went out and cleaned up some rubbish. We did some good and that’s what matters,” he said.

“The thing is, [the cleanup project] is like being faced by a raging inferno and all you have is a bucket of water to throw on it – it doesn’t do much, but it’s better than doing nothing,” he said.

Phuket Lifestyle: Sea creatures will soon have to swim for their lives