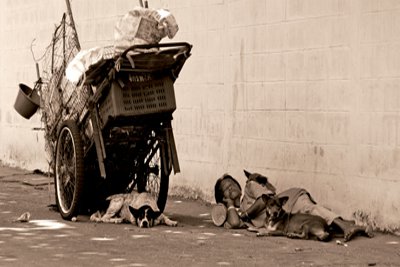 PHUKET: Cast your mind back to any freezing night in New York or London. One of the memories that will likely haunt your conscience is the image of a pathetic human bundle of rags, covered by a frayed blanket or a flattened cardboard box, in a desperate attempt to keep out the biting cold.

Her face, if you can see it at all, is beetroot-red from constant exposure to the harsh elements and from the attempt to warm body and soul by drink – the empty bottles nearby are evidence of that.

All her worldly goods are stuffed into a bag that she uses as a makeshift pillow. She is a bag lady – destitute, suffering, desolate.

Switch to Phuket. There are bag ladies here too – and not to be sexist – a few bag men as well. Poor they may be, but they are by no means helpless or destitute. Nor do they hoard what few possessions they have. In fact they perform one of the most important functions on the island: namely, the collection, sorting and recycling of all those plastic water bottles, cardboard cartons, disused utensils, aluminum cans and tattered old clothes.

In fact they gather up just about anything that can be sold as scrap. You can even see them rummaging through the fly-tip sites which increasingly pockmark the island’s landscape.

No one has told them about the pollution of paradise, about Phuket’s overloaded landfills, about the floating collection of indestructible plastic in the Pacific that’s twice the size of Texas.

Bag ladies do what they do because they see it, quite simply, as a way of earning an honest baht of eking out a living. You see them riding their samlors (side-car motor-bikes) on every soi, almost hidden by the enormous fabric bags they somehow balance on their rickety and rusty machines.

Once their sacks are filled to within a hair’s breadth of the bursting point, they ride off to another Thai entrepreneur who will grade and weigh their spoils, pay a few baht, and then send the material off for recycling.

So what of official garbage collectors? True, the odd covered truck from the OrBorTor [administrative council] does come around to empty the plastic wheelie bins. But it is at best an irregular amenity, and most of the waste goes straight to a provincial landfill.

Moreover, since you have to pay for this collection service on an annual basis, many residents are reluctant to cough up. It is all too tempting to just throw discarded household waste into the bushes, or add it to one of those piles of garbage that appear overnight by the roadside. In any event, the official rubbish service on this tiny island could never cope on its own with the junk generated by a permanent population of maybe half a million, which swells to well over a million in high season. High season indeed for one’s olfactory sense.

So, the bag lady deserves her place in the Phuket sun. Not to disparage her in any way, she is the human equivalent of the scavenging beetle. Without her, Phuket would be not only a less alluring place, but infinitely more noxious and litter-laden. So let us offer praise to the bag lady!