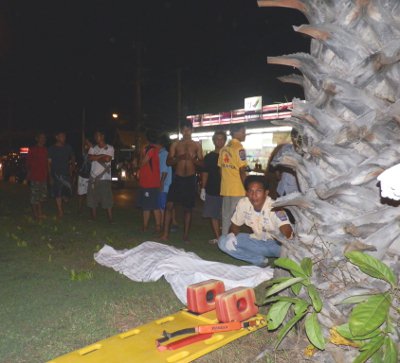 PHUKET: A Burmese man was killed instantly when he was run over by a speeding pickup truck in a hit-and-run accident in Phuket’s Koh Kaew subdistrict last night.

Phuket City Police were informed of the accident at 10:30pm.

Arriving at the scene, the median strip in front of the Supercheap mini-mart on Thepkrasattri Road in Bang Khu, they found the body of the victim lying face-down.

Witnesses at the scene told police that the man had appeared to be drunk as he crossed the road on foot to buy a small bottle of lao khao (rice whisky) at the minimart.

He was walking back across the northbound lane unsteadily when he was hit by a white Toyota Vigo 4-door pickup travelling at a high speed, they said.

The impact catapulted his body onto the median strip. It is believed he was killed instantly.

No witnesses were able to provide the license plate number of the truck, but part of its bumper, dislodged from the force of the collision, was collected as evidence at the scene.

Local people told police that the man, who appeared to be in his late 40s, was employed by the Nareumon Wood Shop in Koh Kaew. However, none could provide his name.

Rescue workers from the Phuket Kusoldharm Foundation unit in Sapam transferred the body to Vachira Phuket Hospital for examination and storage until it can be claimed by relatives.

Phuket move up to 8th in Youth Games