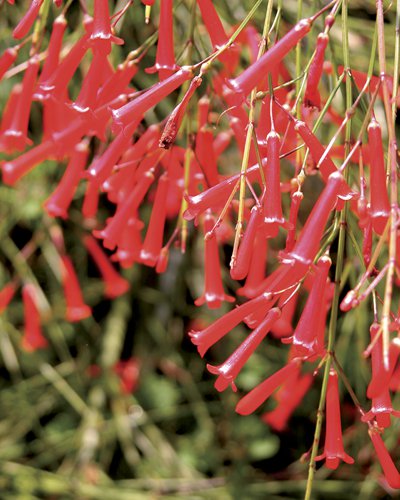 PHUKET: It is always exciting to discover a new plant. I recently chanced on a shrub with fine, arching, broom-like leaves, and masses of tiny but brilliant red tubular flowers. Its name? Russelia equisetiformis.

Despite the tongue-twisting botanical label, this is not a shrub that draws attention to itself and, in any case, it is not common in Phuket. Maybe that explains my failure to spot it before. Excuses, excuses…

The leaves are often reduced to small scales closely held against bright green stems and are consequently barely visible, but the deep scarlet flowers are produced most of the year round. Moreover, the wiry stems create a cascading effect that is especially attractive when overlapping a wall or bank, hence the name; fountain bush.

A small shrub, it blooms best in full sun, and prefers well-drained, gritty soil. It is becoming increasingly available in local plant nurseries. Look out for Pratat farang in Thai.

Another relative rarity, at least in this author’s experience, is the quassia amara. This native of South America is a much larger shrub, up to three meters tall, but also has tubular, scarlet flowers.

The leaves are initially red: only as they mature do they turn a glossy green. The flowers are quite impressive, borne in long racemes up to ten inches long, and are followed by glossy black fruits.

Quassia need plenty of moisture, so ensure it is not allowed to dry out completely. Prune to maintain size and shape.

Other red shrubs are more familiar presences. Ixoras – named after the Indian goddess Shiva – comes in a range of colors of which orange or scarlet is only one hue among many.

The hardiest and most popular variety of ixora is a vivid orange or scarlet, but since there are more than 400 varieties – almost all indigenous to the tropics – the choice is enormous.

It is often the preferred choice for low screens, hedges, or for flanking a wall. It is not only one of the least expensive shrubs available, but one of the most
reliable bloomers.

A neighbor initially planted rows of heliconias in a bed alongside his front wall, but deprived of shade and short of moisture, they soon succumbed to the constant sunshine. Now ixoras blaze away, utterly unfazed by the tropical heat.

There are many hybrid cultivars from the yellow Frances Perry to the rose-pink Rosea, but the scarlet Exotica is a favorite.

No garden should be without some ixoras. They are also good container plants for your patio. By pinching out some of the tips, you can encourage branching. Prune after flowering.

The red ginger (alpinia purpurata or khiing daeng ) is more difficult to cultivate, maybe because it is a herbaceous shrub that requires lots of water.

Considered not a true ginger by some authorities, alpinia is an unusual looking plant, consisting of leaf stalks rising from – in this case – inedible tubers, and bearing huge leaves up to three feet long.

It sports a bright red – yes, red again – inflorescence, which is actually not a flower but a bract. It is extremely popular as an ornamental in gardens, partly because its flowers last a long time.

Unlike its distant cousin, the crepe ginger,(costus speciosus), which has tightly packed, cone-shaped flower heads and which is often featured in massed plantings, alpinia has bracts which open out to display spectacular blooms. It is sometimes grown as a container plant, but it will need plenty of care and attention.

Note that what often appears to be a disease is actually the result of cultural problems, such as nutrient deficiency (or excessive fertilizer), sun-scald or soil dryness and/or soil compaction.

Fungi are microscopic organisms. Most produce spores that are carried by insects, wind, garden tools or by hand. Damping off (sudden collapse) of seedlings, powdery
mildew (white or grey circular blotches), root rot or rust (powdery pustules on the undersides of leaves) are all caused by fungal invasion of the plant.

Viral diseases are most often spread by leaf-eating insects, such as aphids, leafhoppers, white flies and leaf miners.

Phuket Life: Given the chance of his young life